Cassava mealybug (phenacoccus manihoti) is a serious pest of cassava that is widespread in the cassava growing regions of Africa, causing up to 60% yield loss and up to 100% leaf loss. It was accidentally introduced to Africa from South America in the 1970s (Yonow et al., 2017; CABI, 2021) and it entered Uganda in 1992 through the Democratic Republic of Congo and has become fully established in the country (Zeddies, 2000).  Following its introduction into the country, it significantly infested the cassava varieties present in the country causing 80% yield loss which resulted into widespread famine particularly in eastern Uganda (Semakula et al., 1997). Interventions were put in place to alleviate the problem such as destruction of infested plant material and introduction of tolerant cassava varieties (NARO, 2001). These measures mitigated the mealybug population and the impact of the pest over the following years. Furthermore, the emergence of cassava mosaic and cassava brown streak diseases also pushed the mealybug problem to the sidelines.

Cassava mealy bugs in appearance are pale pink, visibly segmented and are covered in a fine coating of wax. They can be found on the lower side of mature leaves along the major leaf veins, on the growing tips of the cassava plant and along stems particularly when population density is high. Its life cycle consists of 5 growth stages; the egg, first (known as crawlers), second and third instars and the adult. The adults reproduce by thelytokous parthenogenesis and as a result all the adults are females. The one adult female can produce up to 500 eggs across all plant growing seasons with the largest number of mealybugs produced during the dry season and populations drop upon the arrival of rains since the rains strike them down off the plants (Omongo et al., 2010). Dispersal of the pest is by transportation and planting of infested planting material by man and wind currents blowing the crawlers (first instar stage) onto new cassava fields. Also, from animals and people moving within or across gardens carrying the crawlers on their bodies from contact with infested plants or carrying infested material (CABI, 2021). 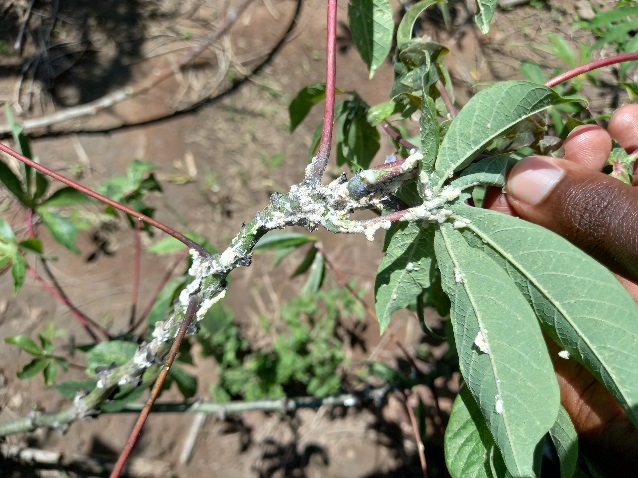 The cassava mealybug consumes sap from the cassava plants using its piercing and sucking mouth parts. As it feeds, it injects toxic saliva into the plant which causes leaf curling, distortion and loss. There is also dieback of the growth tips, stunted plant growth, and weakening of stems making them unfit for propagation (Barilli et al., 2014). It also excretes sugary excrement (honeydew) that provides an ideal medium for fungal growth and this fungal growth results into development of black sooty mould that coats stems and leaves thus affecting photosynthesis. This honeydew also attracts ants that form a symbiotic relationship with the mealybugs whereby they feed on the honeydew and defend the mealybugs from natural enemies (Cudjoe et al., 1993). They are so effective in providing protection to mealybugs that in Ghana they were identified as the reason why biological control of mealybugs was not as effective as expected (CABI, 2021). 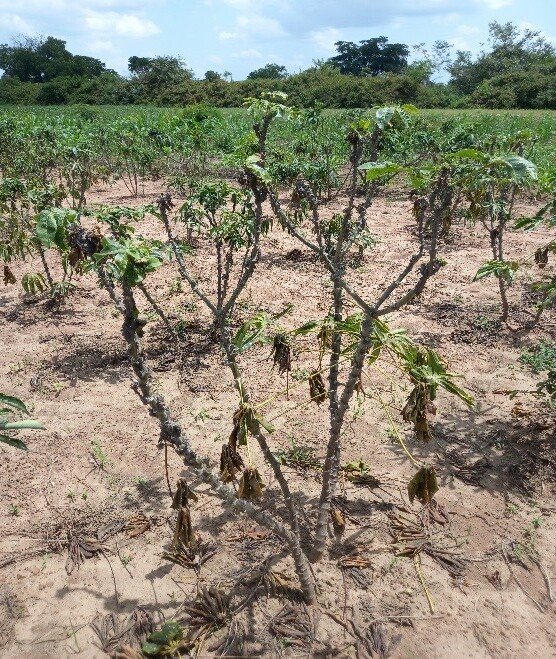 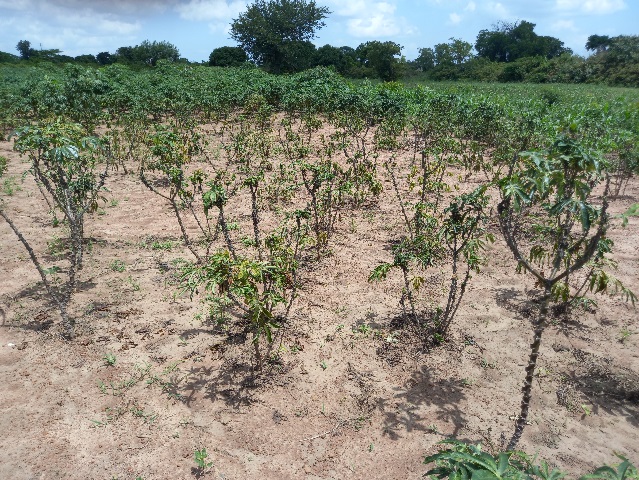 Management may be achieved using; natural enemies e.g. parasitic wasp (anagyrus lopezi), use of resistant varieties, use of mulch and manure to increase crop tolerance to mealubug feeding (Cudjoe et al., 1993), handpick under low infestation or rogue the highly infested plants and spraying infested crops with a neem oil extract or soapy solutions.

In recent times, reports of mealybugs infestations are on the rise. The District Agriculture Officer, Mr. Okello Moses, informed the PlantVillage Soroti team that mealybug outbreaks have become common over the past year. He attributed this to the change in climate which has caused prolonged dry spells as were evident in 2021 and these created conditions that favoured mealybug growth and development. Nationally, in Kitgum district in northern Uganda, mealybugs have destroyed a number of fruit trees and the Ministry of Agriculture has trained surveillance teams with the purpose of preventing entry of mango mealybugs from Rwanda. During interactions with farmers the Soroti PlantVillage field officers were able to witness the presence and impact of mealybugs first hand and also note that there were also mealybug infestations on pawpaws and oranges. This indicates that there are more than one species of mealybugs present in the district. The pest presents a clear and present danger to the food security of the farming communities. The Soroti PlantVillage team is playing its role in working towards helping farmers alleviate this challenge by providing trainings to both farmer groups and individual farmers on how to control the pest using soapy water sprays, hand-picking for low infestation and selection of clean planting materials. These methods were selected because they are sustainable, do not pose risk to farmers and their livestock and most of all, are low cost making them easily adopted and deployed by farmers regardless of income capacity.