Cultiva Dream Team Uganda received visitors from USAID and PlantVillage on 22 June 2022 for a 2-days visit. The visitors included Dr. Zachary Stewart, a soil scientist and production system specialist from United States Agency for International Development (USAID), Annalyse Kehs, PlantVillage operations director, Peter McCloskey, PlantVillage A.I engineer and  Dr. John Chelal, a plant pathologist and the director of Dream Team Agro Consultancy Limited. The purpose of the visit was to check on operations, visit the community as well as the US mission in Uganda.

On 23 June 2022, the visitors accompanied by James Mugo, Milsort Kemboi, Richard Ssebuliba and Kwagala Solome from Cultiva Dream Team, started the day by visiting the US mission in Uganda for a meeting with a number of officials. Annalyse Kehs made a presentation about the Feed the Future Innovation Lab for Current and Emerging Threats to Crops (CETC IL) and PlantVillage activities in Uganda inclusive of the power of a technological equipped work force, which ease knowledge transfer from dream team to lead farmers to following farmers. The Ag3 observatory where satellite information like soil moisture, vegetation and crop growth reflects whenever the PlantVillage Nuru application is used on any farm was also explored alongside the SOS model used in the innovation lab (Surveillance, Outreach and Solution).

Later in the day, the team travelled to Bulyasi village, Lwanga parish, Mpigi district and met dream team members: Owamaani Promise and Omuron Deogratius with whom they visited farmer Salongo Denis. So much was observed on the field concerning insect pests and diseases. The farmer had coffee, banana, vanilla and a zero grazing unit that provides him organic manure for his field crops. 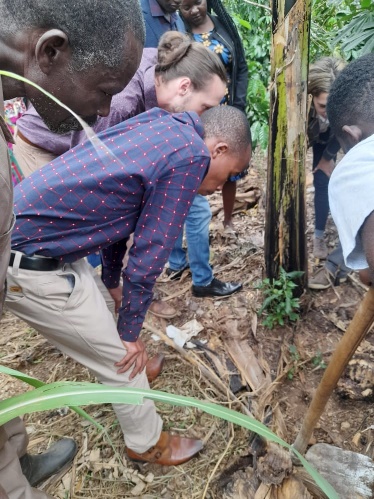 Black coffee twig borers (BCTB) were the insect pests of concern, whereas red blister disease and coffee leaf rust were the diseases of economic importance in the coffee field. For the bananas, black sigatoka and banana bacterial wilt were the diseases that were affecting the field with the banana weevil as the insect pest. The team was able to test the updated Coffee A.I in this field. They advised the farmer to always practice mulching and pruning both the coffee and banana plants as a means of maintaining moisture in the soil, reduce surface run off and limit the growth of weeds. Similarly, pruning eliminates the microclimate for proliferation of disease-causing agents especially the fungi. The team travelled back to Kampala and met up with more dream team members from Eastern Uganda: Amanya Anxious and Julius Engwedu stationed in Serere district together with Kampire Agnes and Samuel Olaboro stationed in Soroti district. 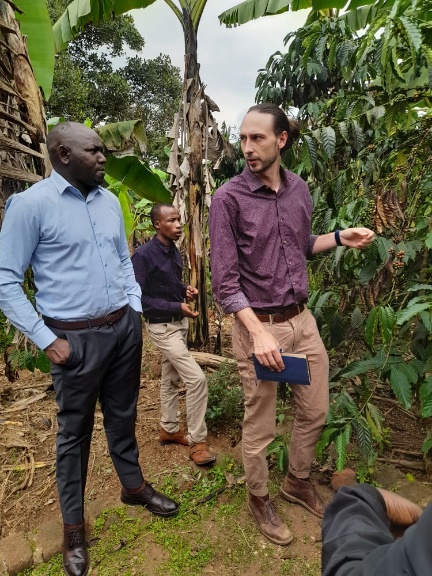 24th June started with a 3 hours journey to Masaka district where they met dream team member Joseph Kisawuzi and Sheila Kyomuhendo stationed in Kalungu district and Cissy Clare Ahereza stationed in Masaka district. They travelled to Buwunga Sub County in Kyanjovu village and met farmers from Kyanjovu coffee farmers’ cooperative limited comprising of 98 females and 27 male farmers. These farmers aim at: value addition to their coffee such that it can fetch more money, start a SACCO within their cooperative, get more trainings on coffee growing, access fertilizers and other inputs. Unfortunately, they had not achieved any of these goals because they lacked electricity which runs the machines used in value addition and limitation of funds to start the said SACCO. The team proceded to the field and observed coffee wilt disease as well as coffee mealybugs. The farmers also practice soil and water conservation through digging of trenches in their coffee fields given that they are on a sloppy land. Their willingness to work with PlantVillage and the passion for farming was highly motivating to the team from PlantVillage.

This was a very educative and fun filled visit. For the first time since training, dream team members were able to meet again and fully interact with each other as well as share ideas. They were also able to share so much experience with Peter, John, Annalyse and Zachary. Due to the complexity of some of their names to the local farmers who could not easily pronounce the names, it is interesting to note that we had to translate into Luganda as Peetero, Anna and Zaakalia. Much more interestingly, we could not find an easy translation for Milsort but John and James were quite comfortable for the farmer.