In a move to accelerate efforts to reach as many farmers as possible, the Cultiva Dream Team Uganda has successfully trained 50 lead farmers from five districts of Uganda: Mpigi, Kalungu, and Masaka Districts in the Central part of the country; and Soroti and Serere Districts in the East.

The week-long training was spearheaded by country lead James Mugo in collaboration with field officers from Cultiva, who carried out the training in one of the lead farmers’ homes in each of the five districts—chosen based on trusted information and referrals by fellow farmers, community stakeholders, and sub-county extension workers.

The 50 lead farmers were selected based on qualities such as good relations with other people in the community, responsibility and mindfulness of their reputation, free of corruption, interest in agriculture, willingness to take up risks in terms of new interventions that may come up and ease of communication.

Masaka District followed suit on September 29, 2022, and the exercise was led by field officers Ahereza Cissy Clare and Richard Ssekamatte Ssebuliba who work in the area. 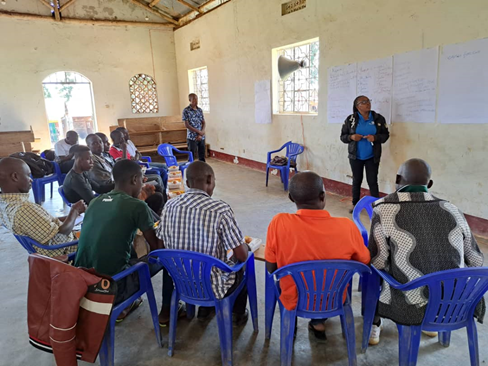 The Eastern team in Soroti and Serere districts did a combined training of their lead farmers on September 30, 2022. The exercise took place at the Arapai Sub-county headquarters in Soroti District.

Anxious Amanya, Julius Engwedu from Serere District, Samuel Olaboro and Agnes Kampire from Soroti District were the officers in charge.

The training centered on the roles of the lead farmer and, most importantly, to bridge the gap between lead farmers and the Cultiva Dream Team field officers. The farmers will act as the contact personnel and a focal point for other farmers in the community.

The lead farmers were also taken through the PlantVillage Nuru app to understand how to diagnose crop diseases and identify pests. The training comprised practicals in the field using smartphones that the farmers received from PlantVillage to enable them to help their community.

The farmers are resourceful because many of them are heads of farmer groups and will help reach out to the farming community and train them. This makes it easy because one farmer can learn from the other and the information spreads faster through the community.