There is a wonderful event in the study of plant diseases which goes like this. In the fields of Bordeaux in SW France there are lots of grapes. The wine is world famous and growing grapes has long been a mainstay of the economy. It is said that in the 19th Century, farmers would prevent local kids from stealing and eating their grapes by applying a foul tasting dye along the pathways where young boys walked. During periodic epidemics of fungal diseases, a now famous French scientist called Pierre Marie Alexis Millardet is said to have noted that those plants sprayed with the dye were healthy and did not succumb to infection (a downy mildew introduced from America). Some experiments later, in 1882 Millardet concluded that the lime and copper mix in the dye was the crucial factor preventing the fungus destroying the plant. The very important remedy Bordeaux Mixture was discovered and this revolutionized the world. Now we have fungicides in the battle against microscopic organisms killing our food. Remember this was not long after the Irish Potato Famine of 1845 which obliterated the food supply of a nation and reduced the population by 25%. [[image-1]large] But as Nicholas P. Money points out in his wonderful book, The Triumph of the Fungi : A Rotten History (page 128), the story is likely not so simple. How could farmers whose job was the cultivation of plants on which they relied not notice that the dye that dissuaded kids from stealing grapes also held back the fungus? Money says that the Bordeaux Mixture was likely discovered 60 years before and it was just common knowledge. It became legitimized by a scientist who brought it to the world but it was just as successful when farmers used it as when it was published in a learned journal. Farmers and food growers generate knowledge as much as scientists do. A second story about plant pests concerns a problem called Striga which is a terrible parasitic plant often called Witches weed. It can easily destroy whole crops in African countries. I was at the FAO (Food and Agricultural Organization) of the UN recently where they explained how they were helping to control it and organized Farmer Field Schools where they rolled out their suggestions. However, farmers were quickly able to identify how the suggested control measures needed to be altered leading to greater success. Farmers not only generate knowledge but also can adapt it and change it leading to better results. What these two stories tell me is that in order to maximize how well we do collectively, we have to be open to the many ways knowledge can flow and grow. We have to rely on the importance of science and the deductive method where experiments inform our concepts. But at the same time, since the task at hand is growing food, we have to involve people growing food as they are vital to finding the best solutions. PlantVillage offers that, and it has been exciting to launch - but it is even more exciting to imagine what the future will be when we begin this crowdsourcing of solutions. 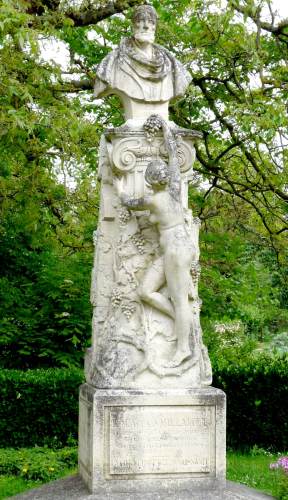 Picture of Alexis Millardet with a naked local peasant girl offering him the grapes he famously saved. Maybe more value should be placed on the knowledge of the girl and other people more connected to the land?
‹ › ×