Cassava is indispensable to food security in Busia. It is a staple food that is widely consumed, as it is a hardy crop that can be stored in the ground for a long period of time. It is used as a fallback source of food that can save lives during famine. Despite cassava being a major crop in the county, it has received relatively little attention compared to other Staples such as maize. The crop has long been threatened by the cassava brown streak as well as cassava mosaic.  These viruses are capable of destroying farmers’ fields if no intervention is offered leaving them with nothing to harvest. On the other hand maize as another staple food for not only the Western region but Kenya at large is also threatened by maize lethal necrosis disease, fall armyworm as well as maize streak virus. These three monsters have seen production decline season after season. Farmers in the region have had a hard time protecting their crops against the challenges majorly due to constrained resources and lack of government support and other well-wishers. Cassava is considered a traditional crop and its production is based on traditional knowledge which is passed down from one generation to the other. This knowledge may not be based on scientific principles which has led to poor production in cassava. This includes the myths that are held by the farmers such as; curling of leaves is due to intercropping cassava and beans, rotting is due to too much water in the field which has some truth, however, this is possible in lowlands and to crops with cassava brown streak.

Farmers have come up with various ways of control some pests such as fall armyworm. They include; ash, soil, pepper, soap powder, kerosene, cow dung, and neem tree. We have seen these techniques practically being used by the farmers and it has been working well with them. One of the advantages is that it's cost-free as well as environmentally friendly. 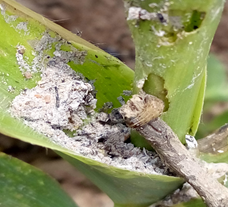 Some farmers have been frustrated with these diseases and the only choice they have is to graze their maize to their cattle.

Figure 4: a cow grazed on maize affected by faw

As the Dream Team, our ultimate goal is to improve the livelihood of farmers by providing them with superior farming techniques such as soil management and conservation, dissemination of knowledge on plant diseases and other related farming practices. It's very interesting to work with diverse people in the community as it gives an opportunity to learn a lot. The farmers are so welcoming they take as through their fields to check their crops and advise them accordingly. By doing this we have gained farmer’s trust and we have been able to exchange contacts for further communication as well as extension services.  Due to this trust farmers tend to take us to community groups such as self-help groups for savings, farmers groups such as one-acre fund and Barraza’s. Through these groups, we have been able to reach farmers easily. It's nice to work with such existing groups since it's economically in terms of time and other required resources.