Josephine Arisat from Asing’e location in Busia County has been growing Cassava since 1995. With climatic change and its consequences; root and tuber crops provides a suitable choice to her as they exhibit higher tolerance threshold to stress such as water and heat.

“Initially, I was planting Cassava for subsistence purpose in a two acre piece of land since there was minimum cassava diseases at that time. Later on in 2016 is when I shifted to planting half an acre for commercial purpose.” She cite the reason for planting less acres as being high prevalence of cassava diseases with time in the region.

Which Varieties do you Plant?

"Before I was planting the traditional varieties. After a training I attended in 2016, I changed to planting certified seeds from either Kalro or from certified seed entrepreneurs. I have been planting MM06 and Mygeria variety.”

Where do you find your Market?

Being a cereal farmer, she sells her Cassava directly to the open market and to an organization called True trade. “In 2019, I met with True trade who were buying tubers directly from my farm. We then formed an aggregation with other farmers and as a member I can sell my cassava produce to the aggregation. As an aggregation, we also buys tubers from other farmers then sell to True trade.”

Josephine reveals that the major challenge in cassava farming is diseases.

How do you curb this challenge?

“Since I received a smartphone with PlantVillage Nuru App, my cassava farming has improved. The smartphone Application has helped me to identify cassava diseases and to know the different types of diseases affecting my cassava. Initially, I used to harvest rotten cassava tubers whereas their leaves looked healthy. I never knew that Cassava leaves can showcase diseases. With the help of Nuru; an Artificial Intelligence assistant, I can scan my cassava leaves and know if they are affected by either Cassava Mosaic disease, Cassava Green Mite or Cassava Brown Streak Disease. The phone also provide solutions to this diseases.”

Before using PlantVillage Nuru smartphone application, Josephine would harvest just 0.5kg per Cassava plant. With an AI assistant in her hand helping her to select healthy cassava cuttings to replant, she harvests between 2.0-5.0 kg per Cassava plant. 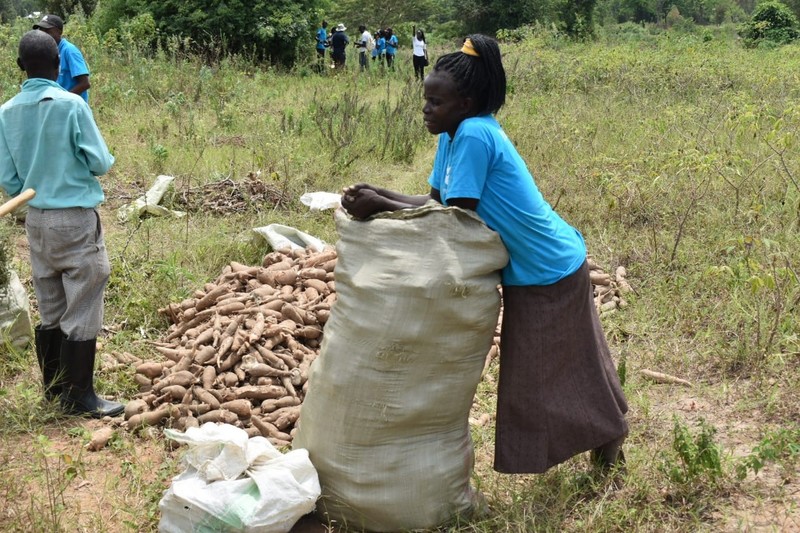 “The problem and loss as a result of cassava diseases is reduced significantly. I can also go to my farm and select clean Cassava seeds to replant using PlantVillage Nuru App. I can say I have an advantage over other farmers who don’t use PlantVillage Nuru smartphone application.”

What would you Advice other Cassava farmers?