A tale of two villages

Growing our own food is a hallmark of human societies. It is the single biggest technological achievement we have made as a species and the ways we grow food are always changing, always adapting, always evolving. It is important to realize that nothing is written in stone and we can change things in which ever way we want. Here at PlantVillage we think about the potential for change a lot. We think about how people growing food- whether that are in Nebraska or Nigeria -could be connected to a world wide web of other growers through the phones in their pockets or the computers in their homes. And so we are extremely excited to be working with the good people at the Millennium Village Project. This project is daring in its scope and works on the idea that it can permanently lift people out of abject poverty in Sub-Saharan Africa by taking a holistic approach and tackling a range of issues at once, such as cleaner water, better education, increased food production and environmental sustainability. It has already made many major advances and you can learn more about their great work on their site: http://www.millenniumvillages.org. For the whole project, growing more and better food is really important and oftentimes a major barrier is the lack of access to information that is already available. As you can daily observe on PlantVillage people have questions and others go off and find great information that they then post. So PlantVillage was greatly interested in Millennium Village. We initially spoke with Dr Sonia Sachs, a pediatrician who is the Director of Heath at the project and was actually already helping PlantVillage out when she shared with us some knowledge on soil erosion in Africa from her experience in Ethiopia. https://www.plantvillage.com/posts/246 Through Sonia we met Dr Cheryl Palm, Dr Generose Nziguheba and Dr Pedro Sanchez who are some of the key people in the agricultural development group at the Millennium Village project. We were interested in finding out what crops are grown in the villages since we knew that the villages are spread out all over Sub-Saharan Africa and therefore cover lots of different habitat types and ecological regions. We already had many crops on PlantVillage that are grown in Africa such as maize, cassava and cocoa. From the Millennium Village people we learned that crops such as: Chickpea, Cocoyam, Finger Millett, Fonio, Groundnuts, Oil Palm, Pigeon Peas, Plantains, Teff and Yams are also important and so we lost no time putting those up on our site. We now have on our site the crops that are important for people in theses villages and that is 35,000 farm households and over 300,000 people. But because the villages were placed in representative sites in Africa to maximize coverage we actually now have crops that are vital for hundreds of millions of people across the continent. As with all our crops we have a standard entry providing the essential information in an easy to access, uniform manner. But the power of PlantVillage is the power to ask a question in a virtual space. And so now, for the first time in human history, anybody interested in finger millet, plantains, teff or yams can enter a common area to discuss their challenges and successes. We at PlantVillage live by the idea, just as Kevin Costner did, that if you build it they we will come. Well, we built it. But not alone of course, we see what we built coming on the shoulders of great work by others and we hope then others will build on us by adding to the store of knowledge that all can benefit from. We do not expect an immediate stampede. There are lots of issues here such as internet connectedness, language and literacy. Just last week I was at the Gates foundation and speaking with, Dr Jacob Godrey Agea an extremely dedicated Ugandan scientist who is helping people in his country grow more food (http://ageajg.weebly.com). What Jacob told me was that a major challenge in Uganda for spreading knowledge is the 59 indigenous languages and dialects, high illiteracy rates (>60%) in the 90% of the people that are farmers. I also spoke with Jeff Rikes and Sam Dryden, both senior folk at the the Gates Foundation and discussed how a barrier to progress is that much of the publicly funded knowledge on Agricultural science is pay per view and not open access as it should be. But we know that by working with people like Jacob, the Gates Foundation and the staff on the ground in the Millennium Villages we can make a start. After all, everyone says that the internet will revolutionize Africa helping people get out of the poverty trap. Lets begin that and work as human villages have always done- and help each other. [[image-1]original] 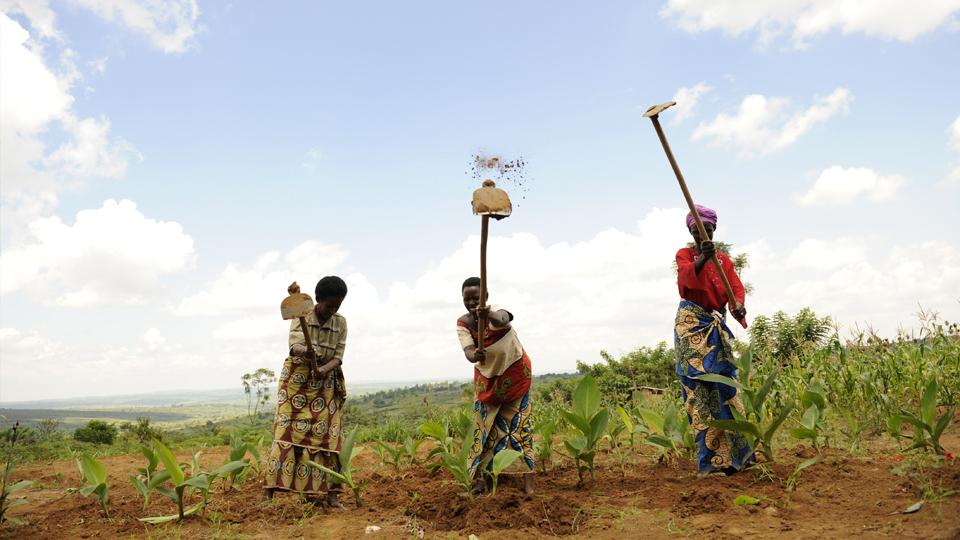 Farmers at the Mayange cluster of Millennium Villages located in the Bugesera district of Rwanda, about 40km south of the capital Kigali. (Image from From the Millennium Village Project. http://www.millenniumvillages.org/the-villages/mayange-rwanda)
‹ › ×