Coffee is Uganda's top earning export crop and has employed up to 5 million people in production and other coffee-associated businesses.

Robusta coffee, which accounts for roughly 80% of all coffee produced each year, faces a challenge due to the Black Coffee Twig Borer pest.

The black coffee twig borer, Xylosandrus compactus, is an ambrosia beetle belonging to the scolytidae family and tribe Xyleborini (Greco and Wright, 2012).

The BCTB is an invasive pest originally from Latin America and the US (CABI, 2016). Its hosts are found in 225 plants worldwide, including coffee, tea, cocoa, and several species of ornamentals. 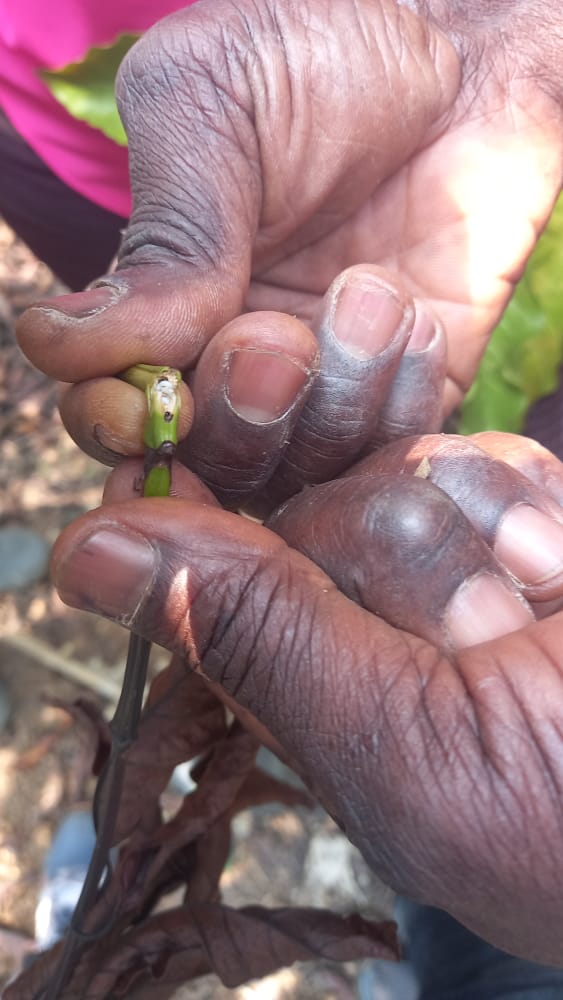 The males live up to 6 days and are flightless. The females live up to 58 days. The entire life cycle, from egg to mature adult, takes 28.5 days at 27 degrees Celsius with 50% and 60% relative humidity. On the 29th day, the new females exit the parental galleries to establish new ones.

Only female beetles cause damage to the plants by boring into the tissue of the host. They bore through the xylem into the twig pitch, and having reached the pitch, they chew along the axis of the twig to make a common brood chamber for the eggs.

Each female hatches between 10 and 30 eggs. The larvae and adults of the BCTB get food from the symbiosis developed with the ambrosia fungus.

The BCTB attacks both healthy and stressed plants, but rarely attacks twigs as thick as 20 mm in diameter.

One week after the initial entry of a female BCTB, the leaves on the infested plant turn dull green, curl inward, and wilt. The leaves then turn brown in a week’s time.

The following are some effective means to control BCTB.

1. Use of the AI-powered Nuru App

A coffee AI model found in the PlantVillage Nuru application, a healthy diagnostic tool as good as an extension agent that uses artificial intelligence to diagnose pests and diseases affecting crops, helps in providing directive and productive advice to the farmer.

The Nuru app also helps in connecting farmers to agricultural experts, a community of users in different regions and seed entrepreneurs for pest resistant planting materials.

2. Use of cultural measures

The following cultural measures can be used to control BCTB:

1. Phytosanitary measures such as cutting, chopping, and burning infected plant parts (stems) can be used. For good results to be attained, it requires collective community action, in addition to regular inspection of the fields to identify any new BCTB infestation.

There is only one gender of the beetle attracted, and all this depends on what kind of attractant is used. The traps are placed at two-thirds from the bottom of the tree and filled with 75% ethanol in lure concentration held in dispenser vials.

A trap density of 15-traps/ha is recommended, and this is best used at the beginning of the rainy season and should be replenished after 2 weeks.

3. Use of chemical control means

In a situation of heavy infestation, chemical sprays by the use of a pressure sprayer can be done after cutting and burning already dry twigs to enhance control of the beetle.

Apply a mixture of systemic pesticides such as immediacloprid (kolinor, confidor, imax at 350g/1 formation) to kill the pest. The pesticide is diluted at 4ml per liter of water.

For more effectiveness, another chemical called Tebuconazole should be added to the same tank at 6 ml/L to kill the hatched larvae.