“The bigger picture about prolonged dry spell which means a drought is foreseeable is growing increasingly clear,” he said on Tuesday, noting that their data shows that May would come and go without any rain.

The period has also persistently been plagued by high daytime and night-time temperatures of up to 41°C in some places.

The Famine Early Warning System has classified much of the country as Stressed. A lot of this is due to the massive Cyclone Idai in Mozambique in March (14th and 15th) pulling a lot of the moisture from East Africa.

We wanted to show how this looks like from the ground. The attached image is from three counties in Kenya (Busia, Embu and Bugoma). We chose three random farms from Google Maps and the WaPOR data from UN FAO is displayed at the above-ground biomass in Kilos/hectare. This is the same as Net Primary Productivity which is just expressed as grams.

As you can see, the crop growth is very much down compared to last year at the same time. This reflects very little growth of decision not to plant maize which is the main crop. Either way it is a terrible situation. Now the arrival of Cyclone Kenneth in Mozambique will very likely compound the problem.

At the start of the long season this year (March/April/May rains) the prognosis was good. Who would have predicted two massive cyclones?  The fact is we cannot continue to farm like this (rainfed agriclture). We need a total transformation

“It is high time, as a country, we started looking at other ways to do farming. We have to invest in water harvesting and irrigation,”  Bernard Chanzu said

PlantVillage will continue to measure the crop stress at the farm level and work with farmers on climate adaptation strategies with the Kenya Government, Self Help Africa and others.  We are not sure what the path forward is but it cannot be business as usual. One idea we have is to work on the Evapotranspiration and Rainfall data from CHIRPS (Climate Hazards Group InfraRed Precipitation with Station data  which is a 30+ year quasi-global rainfall dataset).  You can see on the graph the CHIRPS data (daily but averaged over 10 days, dekadal), the Reference EvapoTranspiration (Dekadal) and the Actual EvapoTranspiration and Interception (Dekadal).

With this we could tell farmers what stress they are in and with the ECMWF tool what the next 10 days will be like. This could prompt action like irrigation tools, rainwater capture or simple slash and mulch. We clearly understand that the suggestion to irrigate is very difficult (if it was easy people would already be doing it).

But we hope it informs decision making and we are working with farmers now to see what type of data delivery format they prefer. But please do let us know what you think would work

Thanks and stay tuned 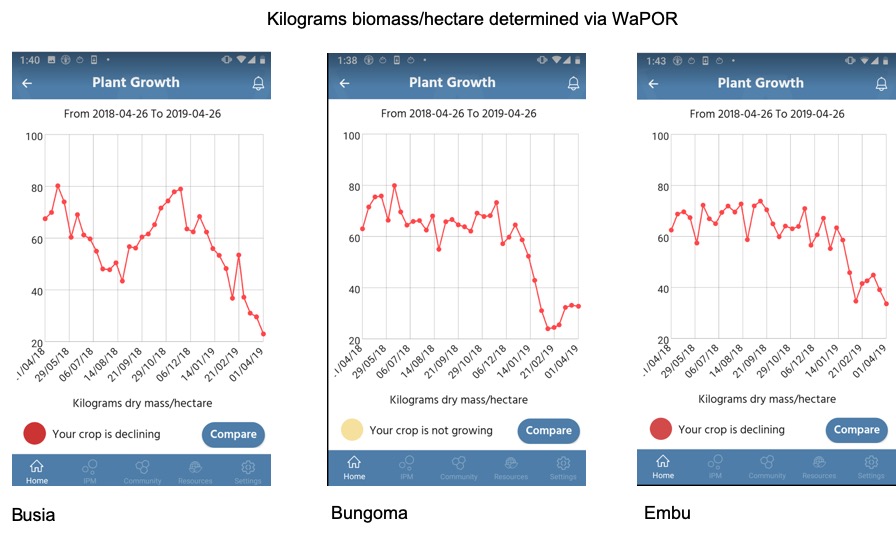 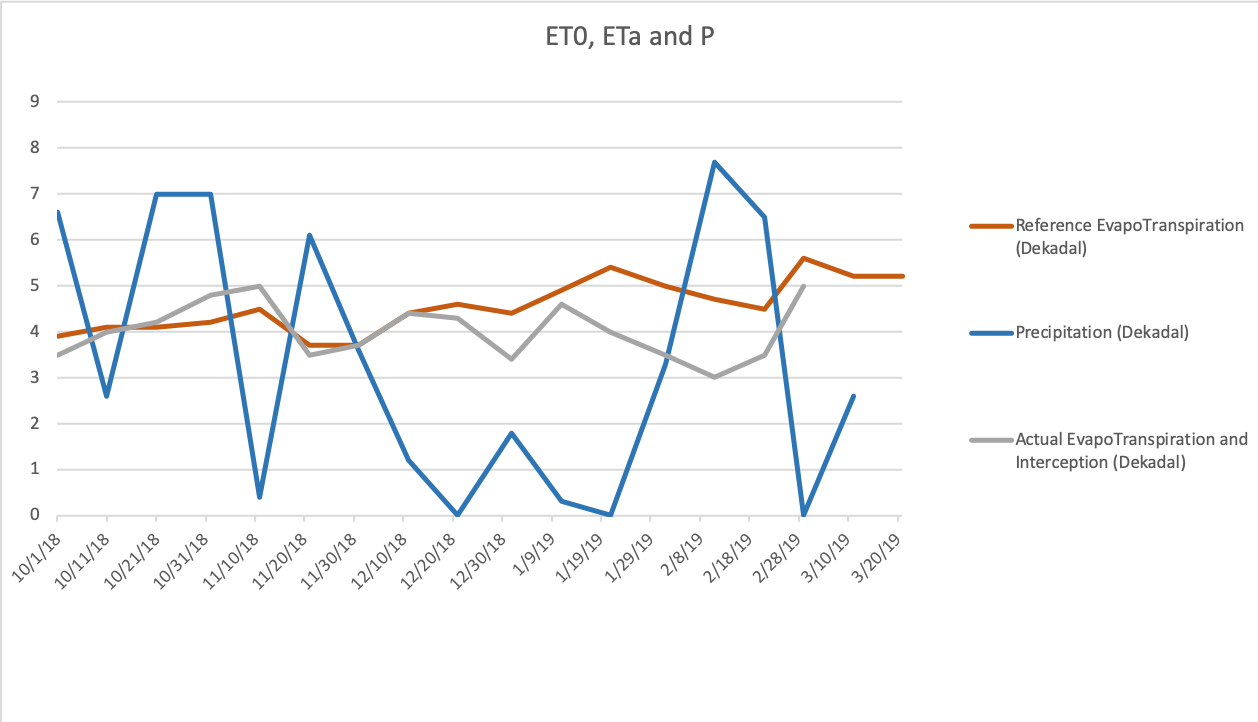 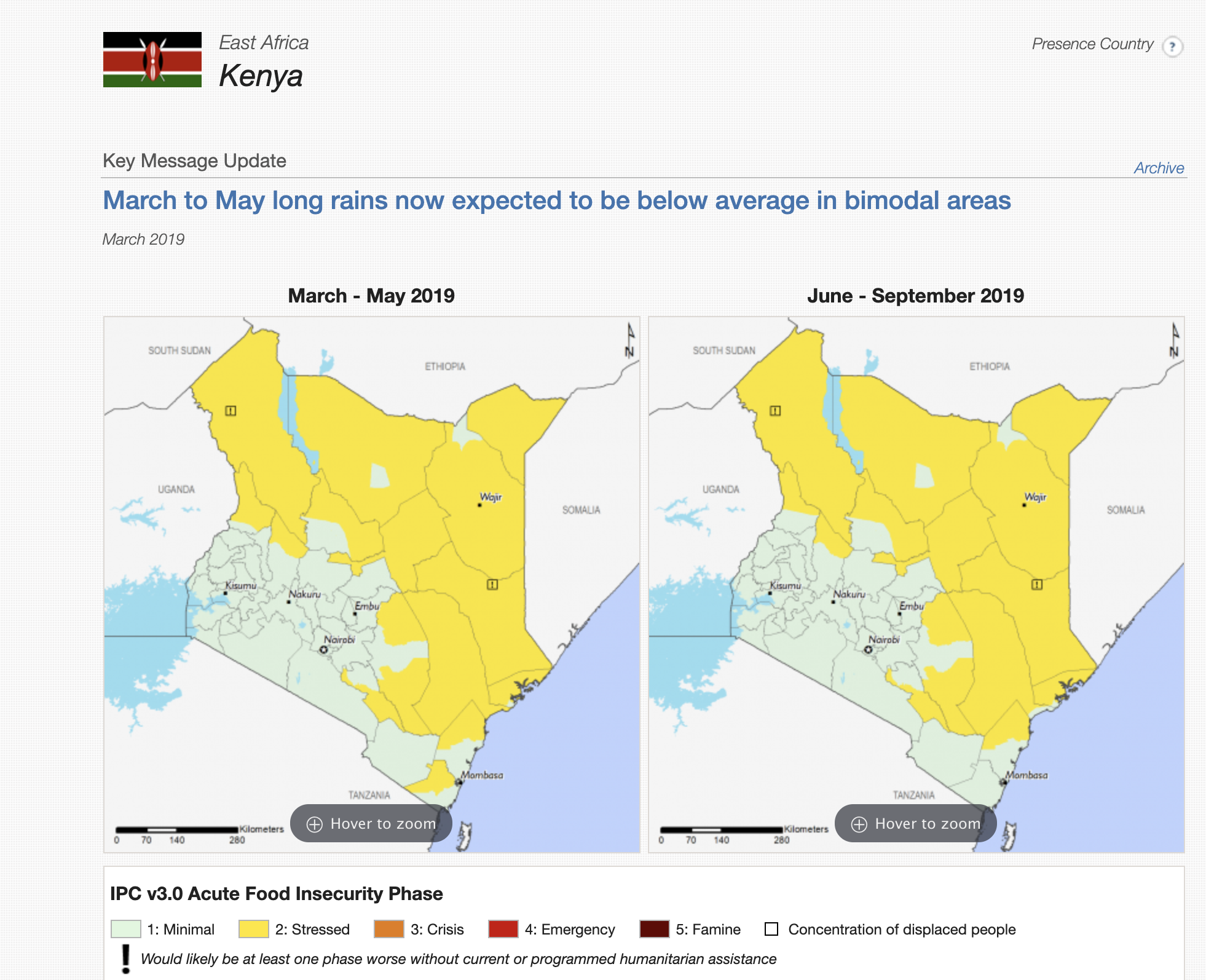