Black pepper, Piper nigrum, is a climbing perennial plant in the family Piperaceae which is grown for its fruits. The fruits are used to produce black, white and green peppercorns which are commonly used as a spice in cooking. Black pepper may be vining or have bushy, wooden stems. The plant has simple, alternating leaves which are oval in shape and produces clusters, or spikes, of 50 to 150 flowers. The fruits develop on the flower spike and are small spherical fruits which are green and ripen to red. Each stem can produce 20–30 spikes. Black pepper can grow to be 10 m (33 ft) in height but under cultivation it is usually restricted to 3-4 m (10–13 ft). It is a perennial plant which can live for over 30 years, with a commercial lifespan of 12–20 years. Black pepper may also be referred to as pepper or Madagascar pepper and is native to South and Southeast Asia. 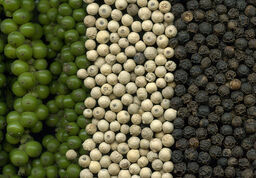 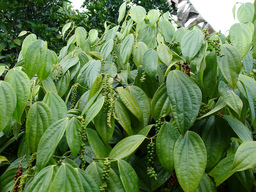 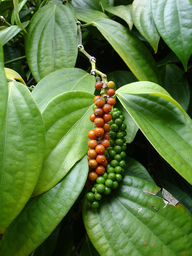 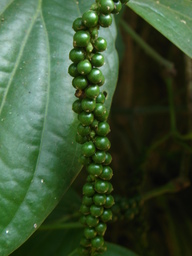 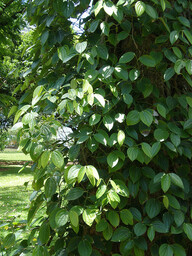 Basic requirements Black pepper is a tropical plant and does not tolerate frost. Plants will not tolerate temperatures below 12˚C (53.6˚F). The plants will grow best in wet, tropical climates at ambient temperatures between 25 and 30˚C (77-86˚F) in a deep, well-draining soil with a good capacity to retain water. The soil should be rich in organic matter with a pH between 5.5 and 6.0. The plants require an annual rainfall of approximately 2000 mm and will require additional irrigation in drier areas. Propagation Black pepper can be propagated from dry seeds or, as is most common for commercial production, from cuttings or stolons of established plants. Cuttings are usually taken from the secondary runners of the plant and should possess one or two leaves. Cuttings are then rooted in a seedbed before transplanting when the plant has 4-7 new leaves. In cultivation, a trellis is used to support the plant. The trellis should be at least 4 m (13 ft) high. Black pepper should be planted using an 8 × 8 m (26 × 26 ft) spacing (i.e. 8 m between individual plants and 8 m between rows).

Cracking on berries encourages secondary infections with other fungal pathogens

As anthracnose is primarily a disease that occurs during the rainy season, systemic fungicides are required to prevent chemicals leaching from the plant; 1% Bordeaux mixture can be applied during monsoon season; metalaxyl and fosetyl are also effective

Discoloration of vine at soil line; cankers on stem may spread upwards; leaves may wilt and drop from plant; numerous small black sclerota (fungal fruiting bodies) develop in affected tissues and can be used to diagnose the disease

Fungus had a wide host range and affects beans, tobacco, soybean, pigeon pea and many other crops; disease is primarily spread via microsclerota in the soil

Black water soaked lesions on leaves and/or stems during wet weather; symptoms usually develop on lower leaves which have been splashed by water; leaves wilt rapidly and drop from plant; entire vine is killed within a period of days to weeks

Can be transmitted to a field through infected runners or roots and adhering soil; foot rot is a destructive disease in Malaysia and Indonesia; emergence of the disease is favored by wet, poorly draining soil

Avoid uneccessary tilling of soil which can be conducive to spreading the pathogen; a cover crop of grass can help prevent water splash on the plants and thus the sread of the fungi; amending the soil with neem cake suppresses the Phytophthora and provides nutrients to the vines; systemic fungicides such as metalaxyl and fosetyl can give some measure of control; efforts are being made to establish resistant verieties 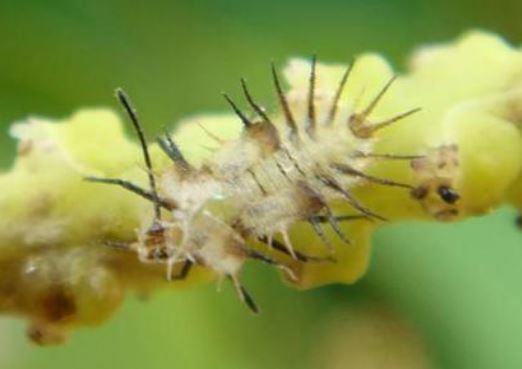 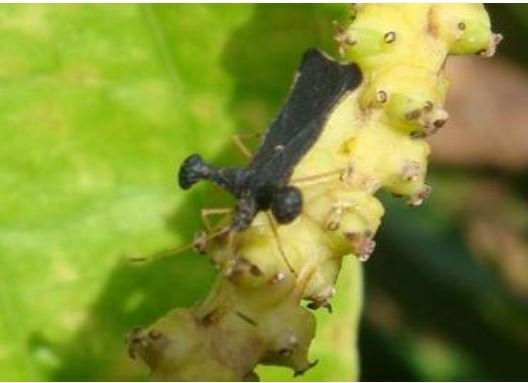 Brown or lack discoloration on inflorescences inflorescence and young berries wilting and turning gray; high infestations can cause inflorescence to collapse; lace bugs are sucking insects, the adult is gray-black in color and has distinctive horn-like protrusions on its shoulders; nymphs are light brown in color with a row af dark bristles on each side

Small populations of the insect can be hand picked from plants and destroyed; insecticide application may be required to control high populations 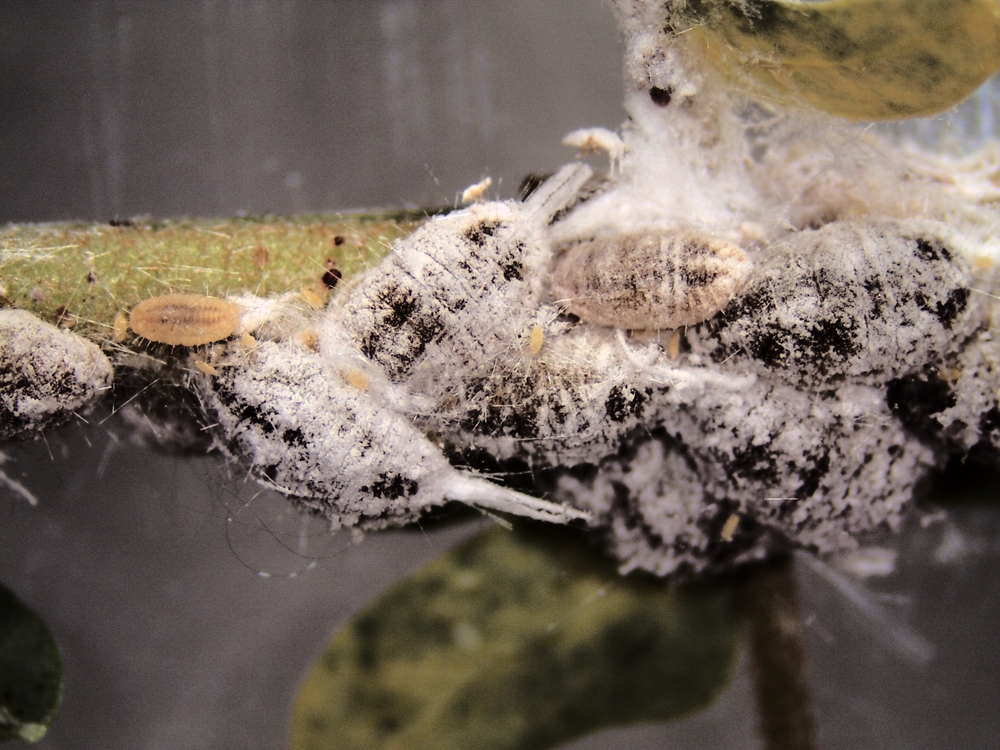 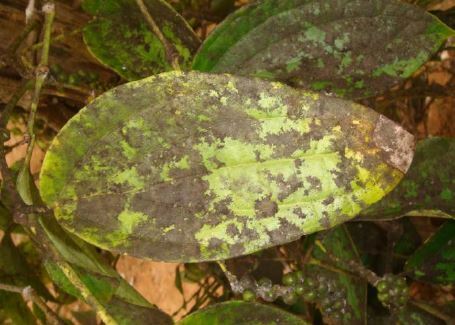 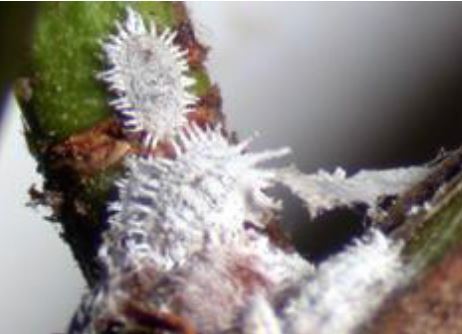 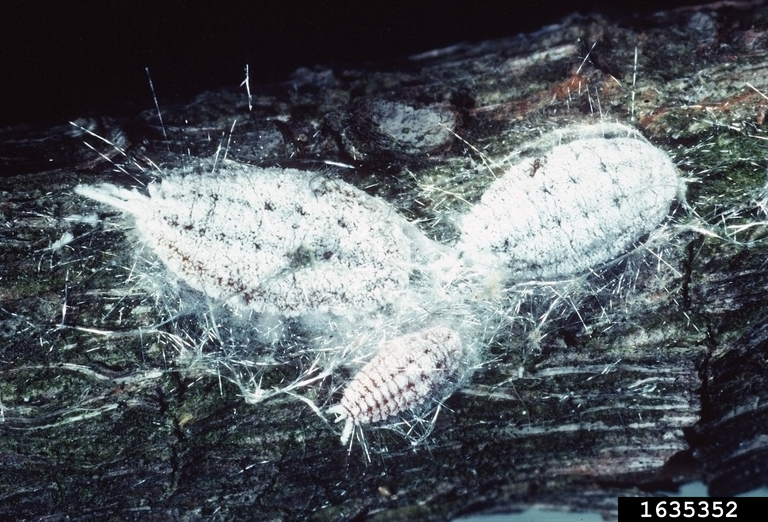 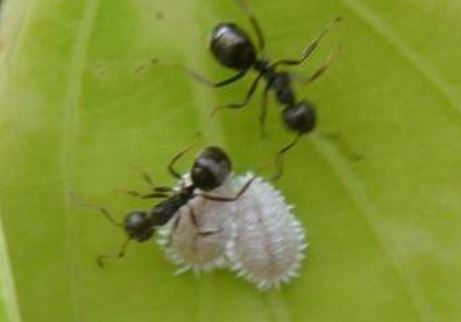 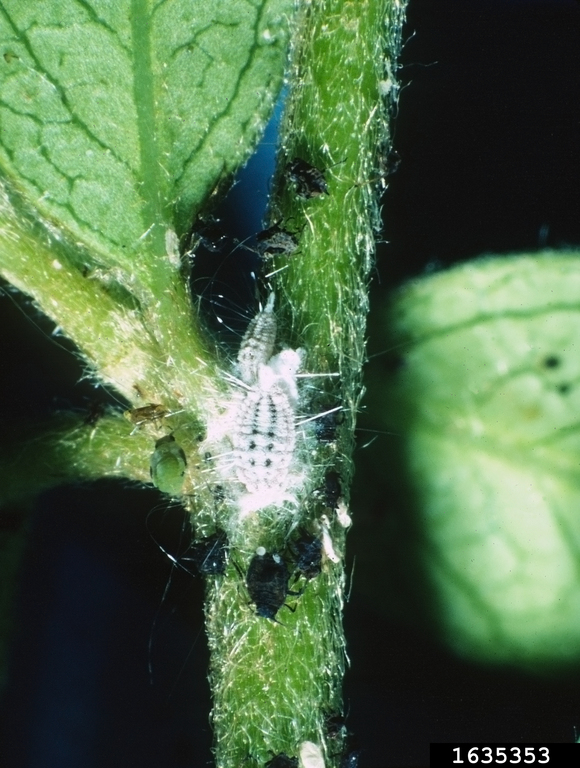 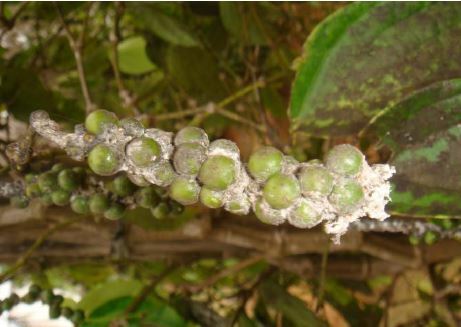 Mealy bugs are most abundant during periods of drought (post-monsoon), particularly when pepper plants are producing new growth and developing new fruit spikes.

Insects may be dislodged by spraying a strong jet of water on the plants; several applications of appropriate insecticides may be required to control heavy infestations.