Cashew, Anacardium occidentale, is an evergreen tree in the family Anacardiaceae grown for its edible fruits (nuts). The cashew tree has a branching main trunk and characteristic domed crown. The thin foliage of the tree is limited to the ends of the branches and is made up of oval-oblong leathery, shiny dark green leaves. The leaves are smooth with pronounced veins and midrib and possess petioles which are swollen at their base. The tree produces numerous pinkish-white flowers on drooping panicles and a kidney shaped true fruit (nut) which is approximately 3 cm (1.2 in) long with a gray-brown shell and develops from a fleshy accessory fruit, sometimes referred to as the 'cashew apple'. The cashew apple is pear shaped and red to yellow in color. Cashew trees can reach a height of 12 m (39.4 ft) and have an economic lifespan of 25 years after which time they are replaced in commercial plantations. Cashew originates from Brazil. 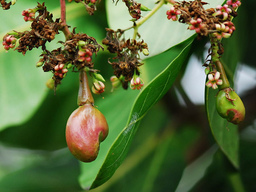 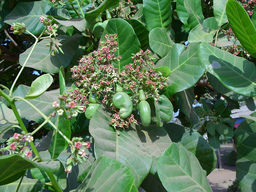 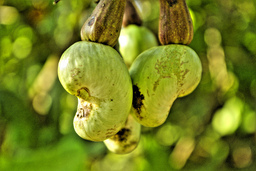 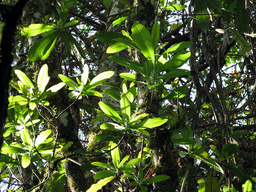 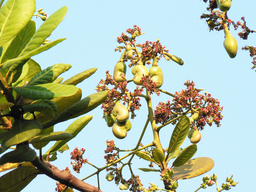 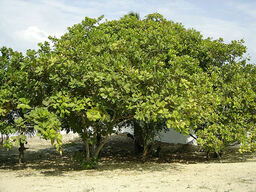 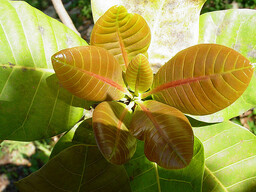 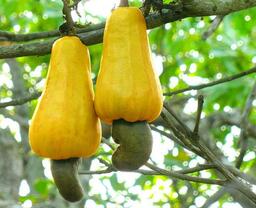 Cashew nuts are usually eaten after roasting either as a snack or as in ingredient in other dishes. Cashew apples are also edible and can be eaten fresh or cooked in a variety of dishes. It may also be used to flavor drinks or be fermented to produce vinegar or alcoholic beverages.

Basic requirements Cashew trees grow only in regions with consistently high temperatures, typically between 24 and 28°C (69.8–82.4°F). The trees cannot be grown in frost prone areas as they will be killed by the low temperatures. Cashew will grow optimally in deep, well draining soils with a pH between 4.2 and 8.7. The trees have the ability to grow in sandy soils where other fruit trees will not survive. In cooler areas, they can be grown in containers and moved indoors in winter to prevent damage to the plant. Propagation Trees are propagated from mature seeds which can be directly sown at the final planting site or planted in polyethylene bags to produce seedlings for transplanting. Only seeds that sink when floated in water should be selected for planting. Newly emerging seedling should be grown under approximately 45% shade in the nursery and hardened off in sunlight before final planting. As the seeds have a poor germination rate 2–3 seeds should be sown per planting hole and then thinned as necessary. Seedlings should be thinned to a final spacing of 10 m (33 ft) allowing a further 10 m (33 ft) between rows. General care and maintenance Young trees should be provided with supplemental irrigation to help them establish. Establishment of trees is slow but mature trees can survive dry periods as their extensive root systems can access moisture deep in the soil. The area around the trunk of the tree should be kept free from weeds to prevent competition for water and nutrients, particularly during establishment. Cashews require little pruning. Pruning is limited to the removal of limbs to facilitate movement of machinery in commercial plantations and is only practices on trees that are 6 years old or greater. Harvesting Young trees do not produce high yields of cashews and the yield increases as the trees mature. Do not attempt to break open the seed of the cashew nut immediately following harvest as the seed contains a toxic oil. This oil causes an itchy rash of the skin and painful blisters in the mouth if eaten. Instead, the nuts should be dried for several days and then roasted before being cracked open.

Some dwarf types of cashew are resistant to this disease; disease is widespread in cashew growing regions of Brazil

Currently no control measures are used

Water-soaked lesions on leaves, twigs, flowers or young apples which develop into orange-brown or red lesions;

A protective coating of copper-based fungicide on susceptible parts of plant can prevent the disease; fungicide should be applied when buds begin to expand through to fruit set but are not required during dry periods

Chlorotic spots on upper surface of leaves which spread to lower surface as infection progresses; dark-brown to black fungal patches on leaves; leaves shrivelling and dropping from plant

Adults large and gray-brown with knobbly appearance; larvae legless grubs which are white with a brown head

Remove bark from infested areas and destroy any larvae or pupae found, this process should be repeated every month for up to six months; severely infested trees should be removed and destroyed; remove all adult weevils from tree prior to destruction and also remove bark and kill all larvae and pupae

Necrotic lesions on fruit which develop into hard lumps; pockmarks of fruit; spotting on kernels

Deformed leaves with angular lesions along veins; leaves may drop from plant; elongated green lesions on young shoots which may exude gummy substance; dieback of shoots

Helopeltis bugs are slender with long legs and antennae; antennae twice as long as body; females are red; males brown; nymphs are yellowish in color

Monitor crop regularly for signs of damage; conserve populations of natural enemies, weaver ants can reduce populations; avoid interplanting cashew with other crops which are hosts for helopeltis bugs such as tea and cotton