Chard, Beta vulgaris var cicla, is an herbaceous biennial plant in the family Chenopodiaceae grown for its edible leaves and leaf stalks. The chard plant has an erect growth habit with a basal rosette of leaves with long fleshy petioles which can be red or white in color. The leaves are large and wrinkled with a pronounced midrib and prominent veins. The chard plant can reach 30–40 cm (12–16 in) in height and is usually grown as an annual, harvested after one growing season. Chard may also be referred to as Swiss chard or silverbeet and likely originates from the Mediterranean. 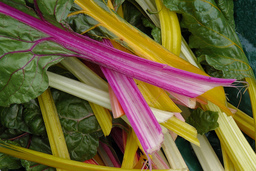 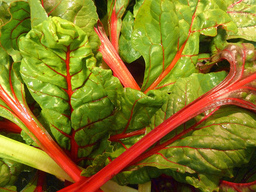 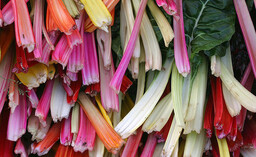 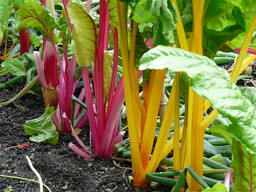 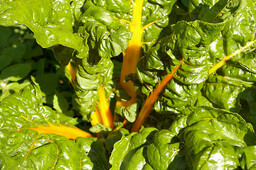 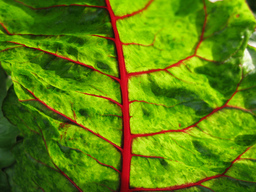 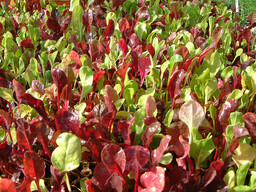 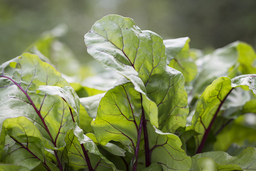 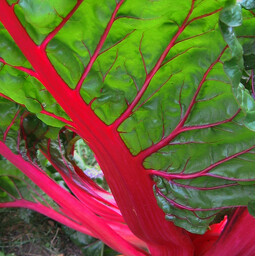 All parts of the chard plant are edible. The leaves and petioles (leaf stalks) are usually consumed after cooking with the former being eaten in a similar way to spinach and the latter similar to asparagus.

Basic requirements Chard is best grown in moist, fertile, and organically rich soils. The soil should be light to sandy, and well drained with a pH between 6.0 and 7.0. The plants should be positioned in full sun or light shade. Chard grows best in cool climates and can tolerate moderate frosts although prolonged freezing will cause some varieties to bolt. The optimum temperature for growth is between 15.5 and 18.3°C (60–65°F). Planting Seed may be sown in the ground 30 days prior to the last spring frost as the seedlings are tolerant to moderate frost. Plant one seed every 2.5 cm (1 in) at a depth of 13 mm (0.5 in) in rows spaced 30–40 cm (12–16 in) apart. Keep the seedbed well watered. Seedling should emerge in 5 to 17 days at temperatures between 10 and 24°C (50–75°F). When seedlings have reached between 7 and 10 cm (3–4 in) in height, thin to a final spacing of 7–10 cm (3–4 in) between plants. If planning to harvest entire plants at one time, plant seeds every 2–3 weeks to ensure a continuous supply. General care and maintenance Chard requires plenty of moisture to develop optimally. Even watering will promote the development of good quality roots. Soil moisture can be conserved by applying a layer of mulch around the plants. In addition to moisture, chard benefits from an adequate supply of nutrients. Apply a complete fertilizer at planting to ensure optimum development. Remove any weeds around plants by cultivating shallowly to avoid damaging the developing roots. Harvesting Leaves can be cut from the plant at any point after they develop but if plant is to reach maturity then it is best to remove the outer leaves that have fully developed first.

Water-soaked, brown lesions on the leaves; center of leaves breaking down

Bacteria is common in most soils, particularly if area is frequently planted with susceptible crops

Remove and destroy infected plants; avoid planting in poorly draining soil; rotate crops with corn, small grains or grasses where possible; treat soil with an insecticide prior to planting to reduce damage caused by grubs and larvae which promotes bacterial soft rot

Dark and withered lesions on seedling stems; lesions may be black and greasy; death of seedlings

Treat seeds with fungicide prior to planting; plant in well draining soil; do not plant until soil is sufficiently warm

Plant only healthy transplants; remove and destroy any infected plants to limit spread; use floating row covers to protect plants from leafhoppers in the home garden

Feeding damage on stems; death of seedlings; seeds dug up; insect is a dull blue-black or brown beetle about 0.6 cm (0.52 in) long; tips of antennae are often enlarged, resembling a club

Beetles are generally active at night; during the day beetles hide in organic debris

Ditches filled with water can prevent spread of beetle to/from adjacent fields; remove all weeds from garden borders; if beetle is problematic then appropriate insecticides can provide control; insecticides are usually in the form of baits

Small holes or pits in leaves that give the foliage a characteristic “shothole” appearance; young plants and seedlings are particularly susceptible; plant growth may be reduced; if damage is severe the plant may be killed; the pest responsible for the damage is a small (1.5–3.0 mm) dark colored beetle which jumps when disturbed; the beetles are often shiny in appearance

Younger plants are more susceptible to flea beetle damage than older ones; older plants can tolerate infestation; flea beetles may overwinter on nearby weed species, in plant debris or in the soil; insects may go through a second or third generation in one year

In areas where flea beetles are a problem, floating row covers may have to be used prior to the emergence of the beetles to provide a physical barrier to protect young plants; plant seeds early to allow establishment before the beetles become a problem - mature plants are less susceptible to damage; trap crops may provide a measure of control - cruciferous plants are best; application of a thick layer of mulch may help prevent beetles reaching surface; application on diamotecoeus earth or oils such as neem oil are effective control methods for organic growers; application of insecticides containing carbaryl, spinosad, bifenthrin and permethrin can provide adequate control of beetles for up to a week but will need reapplied