Ginger, Zingiber officinale, is an erect, herbaceous perennial plant in the family Zingiberaceae grown for its edible rhizome (underground stem) which is widely used as a spice. The rhizome is brown, with a corky outer layer and pale-yellow scented center. The above ground shoot is erect and reed-like with linear leaves that are arranged alternately on the stem. The shoots originate from a multiple bases and wrap around one another. The leaves can reach 7 cm (2.75 in) in length and 1.9 cm (0.7 in) broad. Flowering heads are borne on shorter stems and the plant produces cone shaped, pale yellow flowers . The ginger plant can reach 0.6–1.2 m in height (2–4 ft) and is grown as an annual plant. Ginger may also be referred to as true ginger, stem ginger, garden ginger or root ginger and it is believed to have originated in the Southeast Asia. 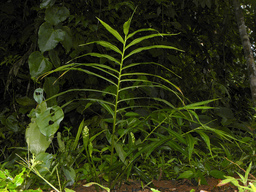 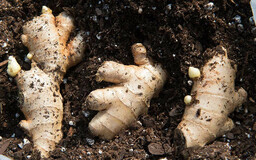 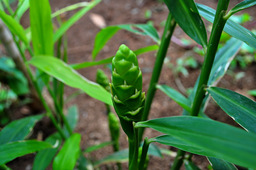 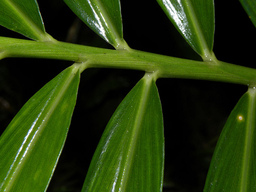 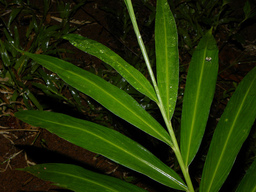 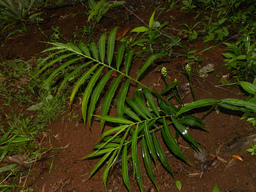 Ginger is popularly used as a spice in cooking and can be used either fresh, dried or powdered. The fresh rhizome can be used to extract ginger essential oil. Ginger may also be used to flavor beverages. Ginger continues to be a popular folk remedy in China and India.

Basic requirements As a tropical plant, ginger grows best in warm and sunny climates in a deep but well draining soil loam that is high in organic matter. The optimum soil pH for growth of ginger is between 6.0 and 6.5 and the plant requires a minimum temperature of 15.5°C (59.9°F). Ginger plants require an average annual rainfall of between 250 and 300 cm for optimal growth and development and require additional irrigation where rainfall is not adequate. Ginger plants will not tolerate waterlogged soils. Propagation Ginger is vegetatively propagated from small sections of the rhizome, called sets. Sets are produced by cutting a small 3–6 cm from a living rhizome. Each piece should possess at least one living bud which will produce shoots. The ginger sets can be pre-sprouted in pots or nursery seed beds by covering with a layer of soil or they can be planted directly at the final planting location. The bed should be prepared for planting by digging to soil to a fine tilth and removing any weeds that are present. The addition of lime to the soil adjusts the pH while helping to provide the calcium required by the plants during their growth. Lime should be added to the soil in appropriate amounts in the Fall prior to planting. The sets should then be planted in early Spring at a depth of 5–12 cm, leaving 15–35 cm between plants and 25–30 cm between rows. For optimal growth, the soil temperature at planting should not fall below 25°C (77°F). General care and maintenance Ginger has a tendency to grow horizontally and the soil can be hilled around the growing stems to force a more vertical growth habit. Soil should be hilled 3 to 5 times during the growing season. Any exposed rhizomes should be covered with soil and weeds should be removed from the bed. Ginger will benefit from the addition of a complete fertilizer as well as phosphorous, calcium and organic matter prior to planting. During the growing season, additional fertilizer can be applied as a side dressing. The side dressing should be made 25 to 30 cm (10-12 in) from the row of plants due to ginger being easily damaged by fertilizer applications. Side dressings should be made every 2 to 3 weeks during the growing season to ensure the ginger is suppied with adequate nutrients. Harvesting Ginger is usually harvested after the leaves senesce, dry out and the stem falls over. Ginger roots are harvested by digging. Commercially produced ginger is harvested with the use of cutter bar which is pulled by a tractor. After harvest, the ginger should be cured for 3 to 5 days to prevent the development of mildew on the rhizomes. 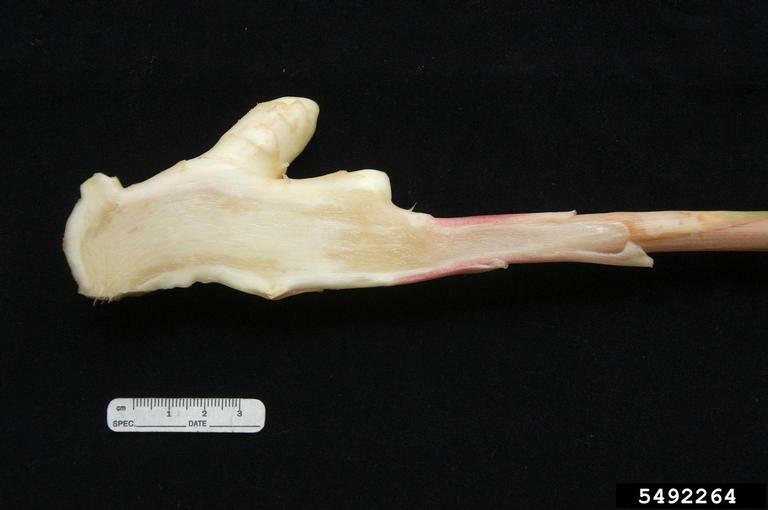 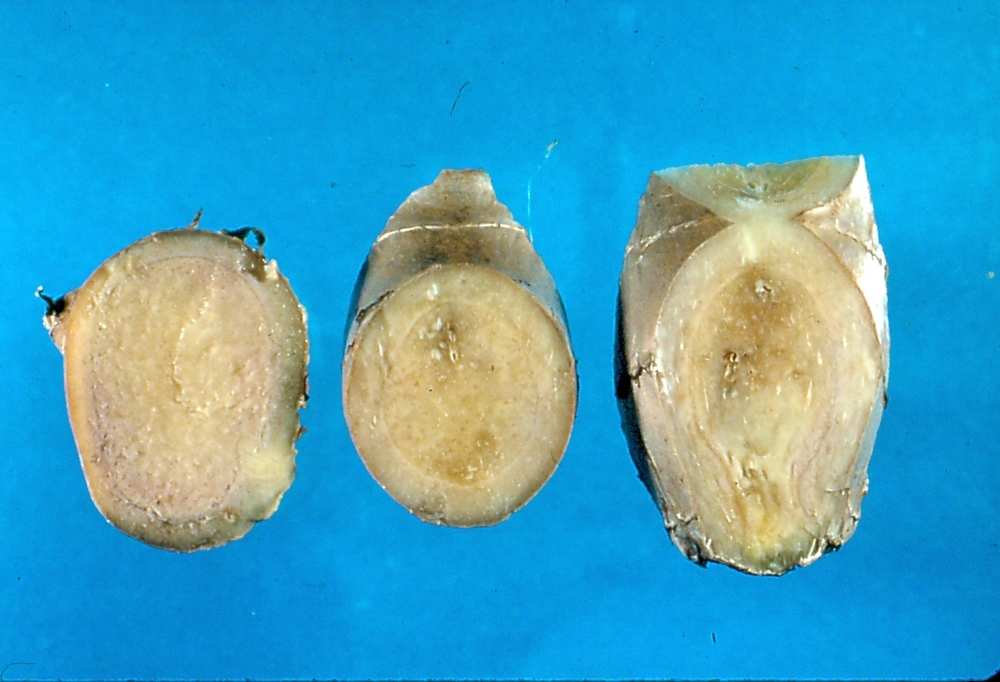 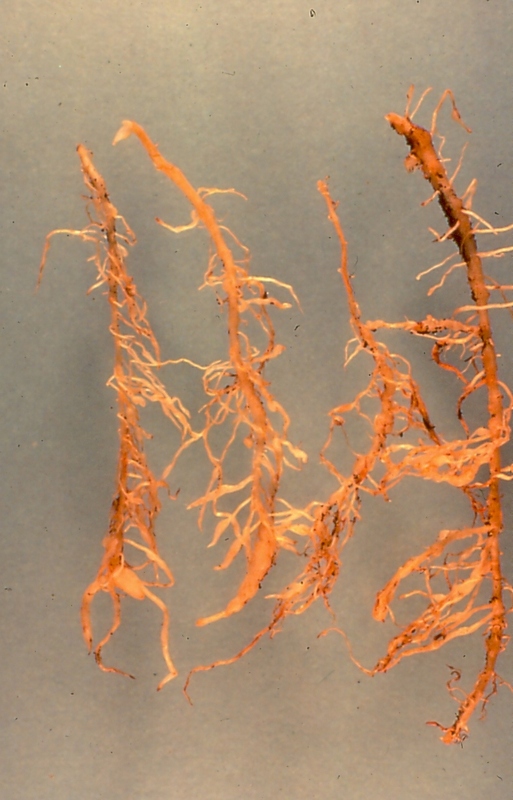 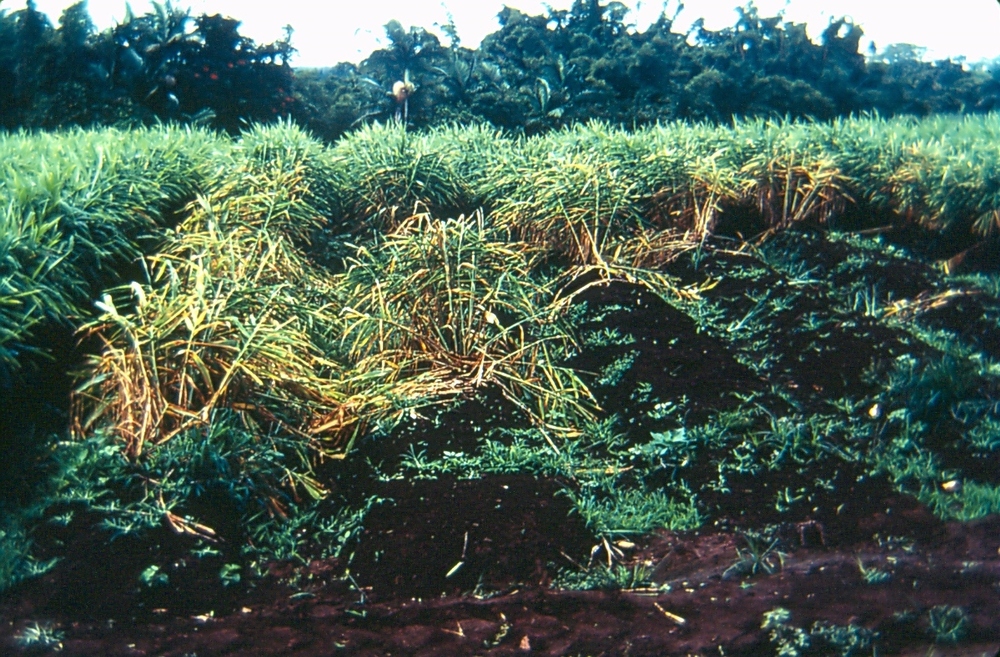 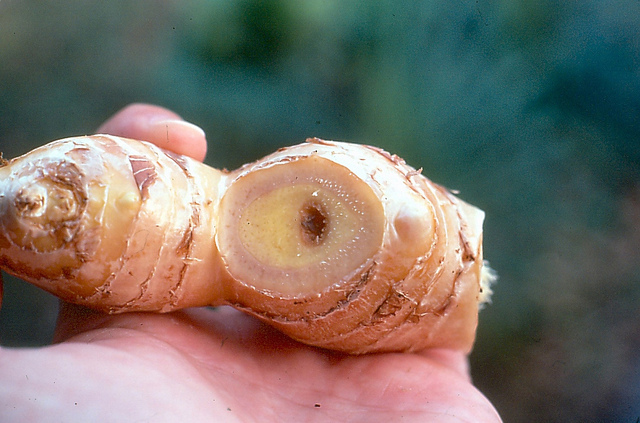 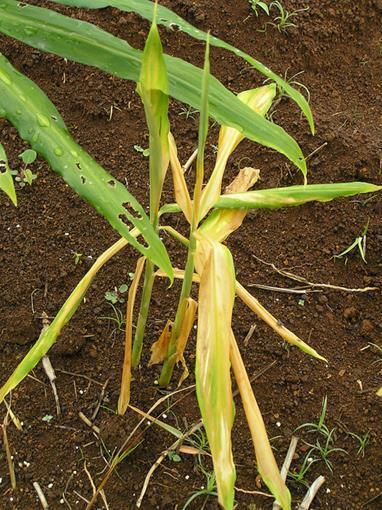 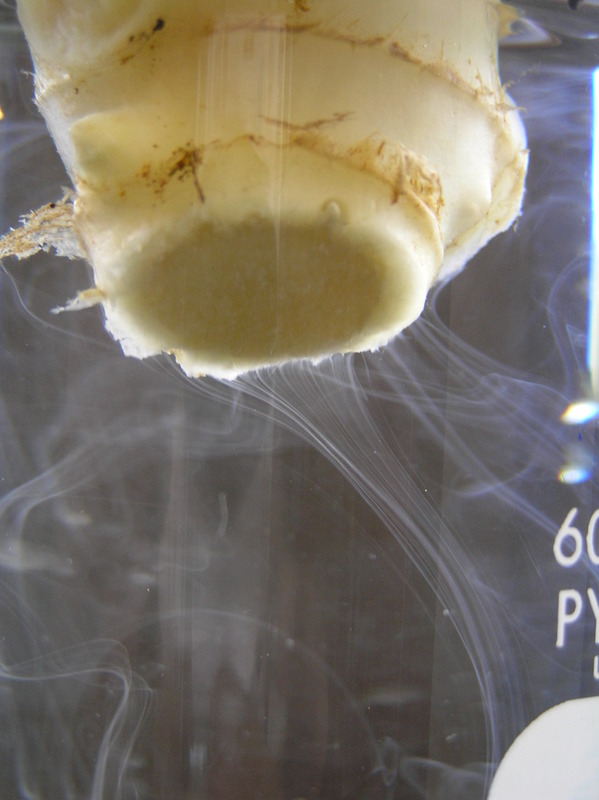 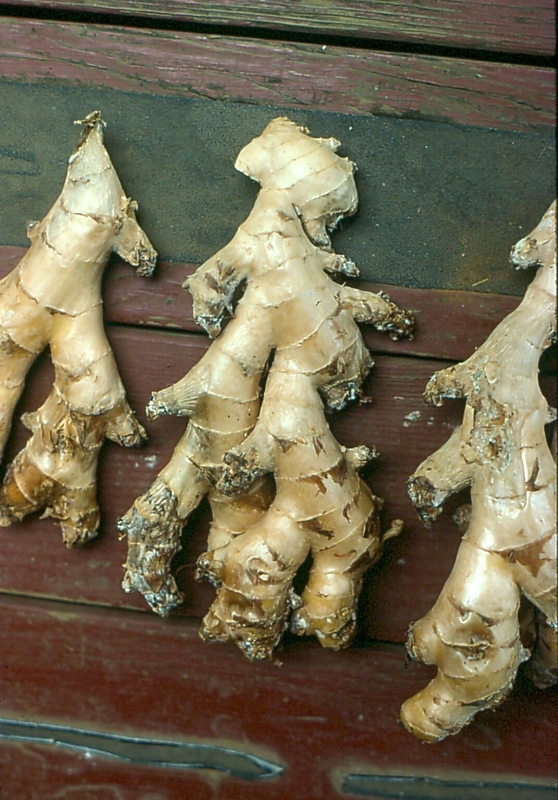 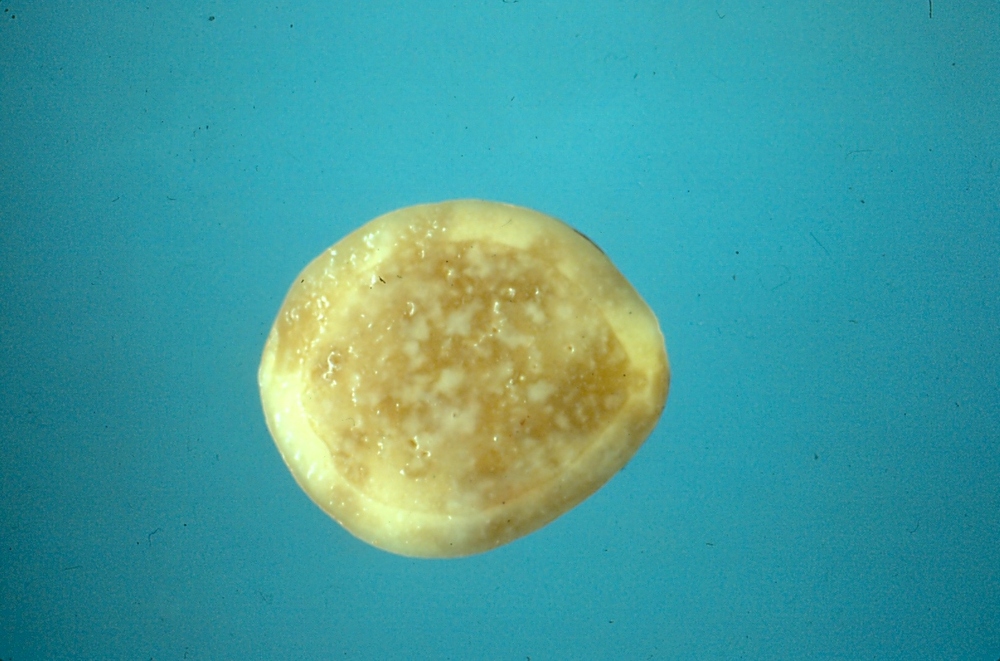 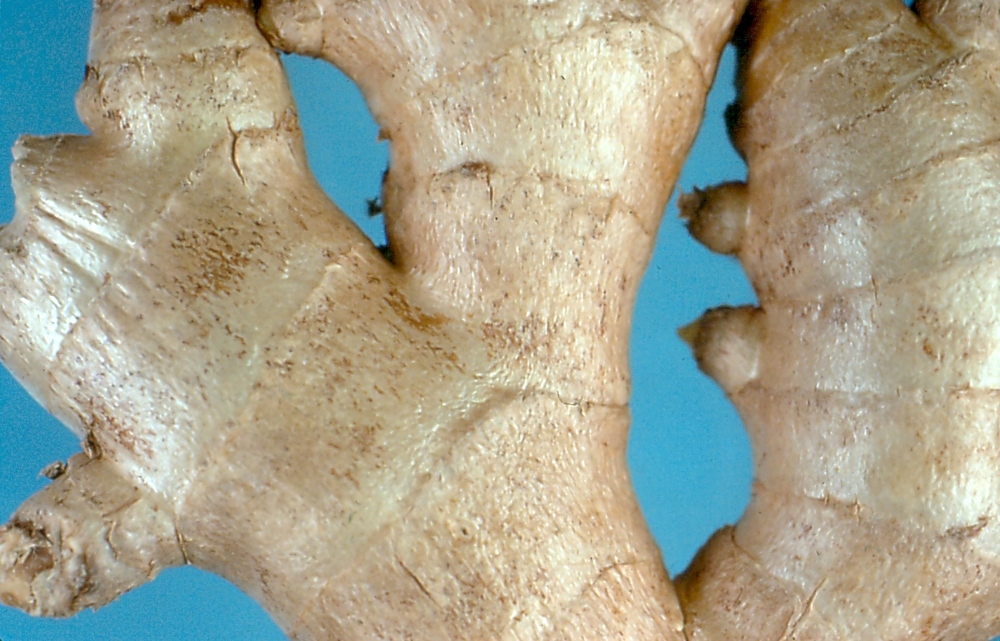 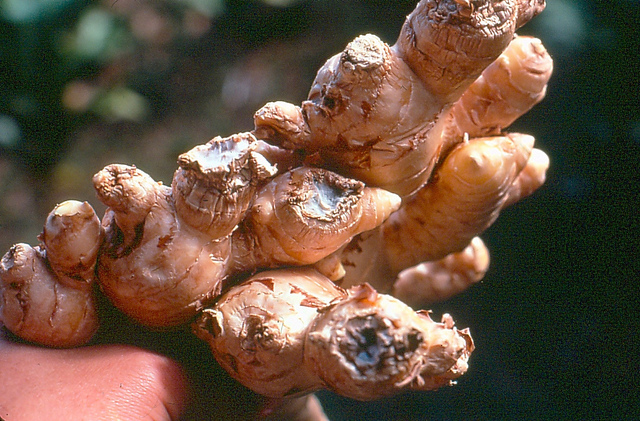 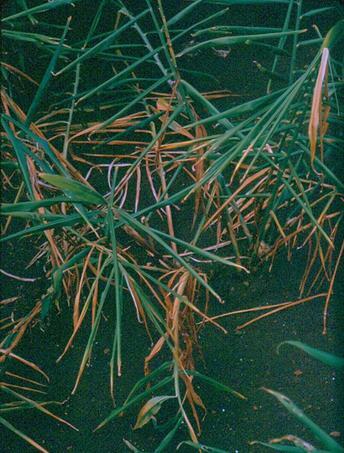 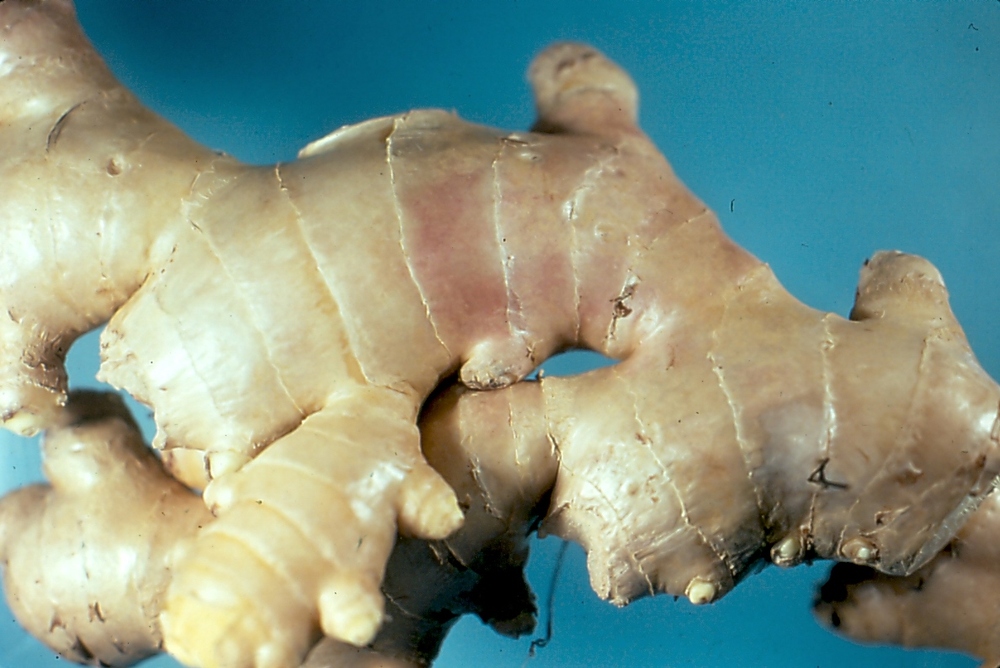 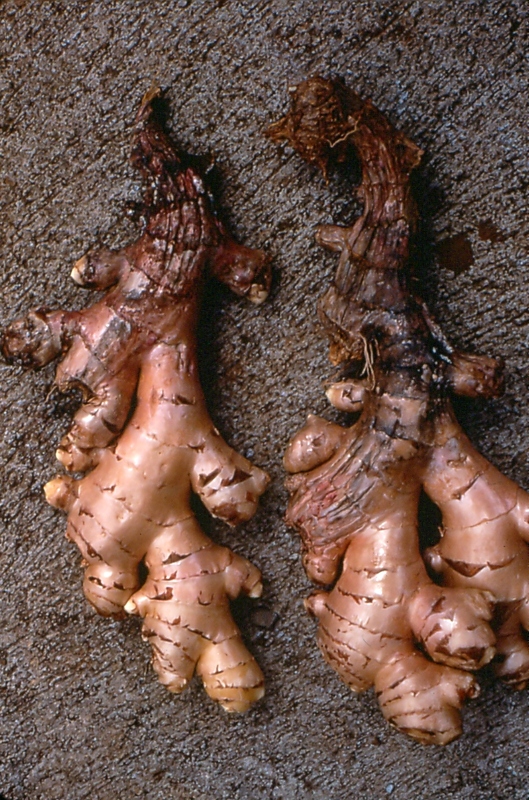 necrosis and rot of edible root 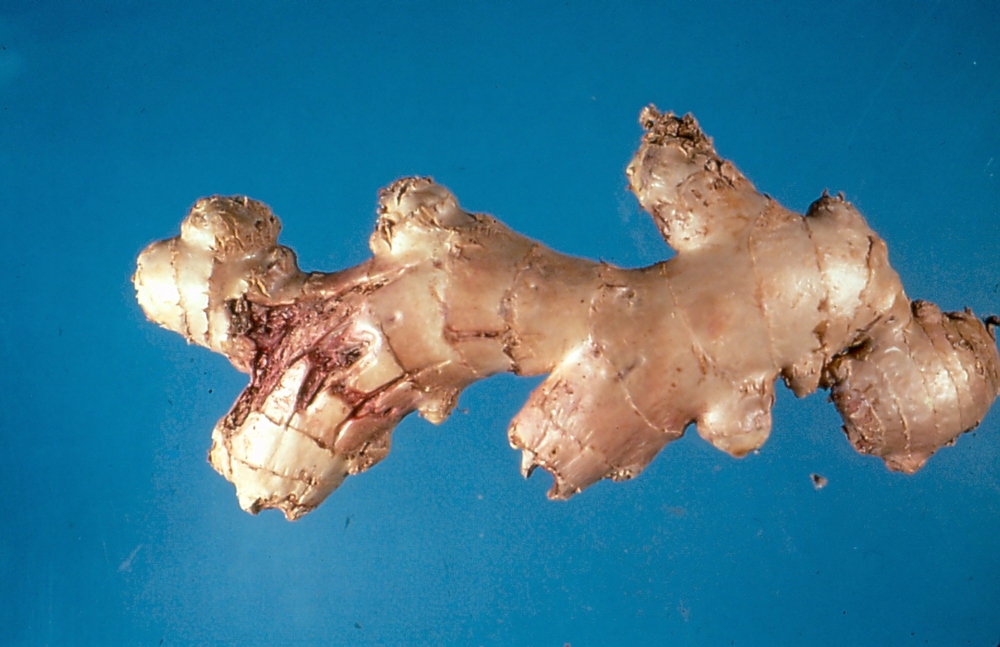 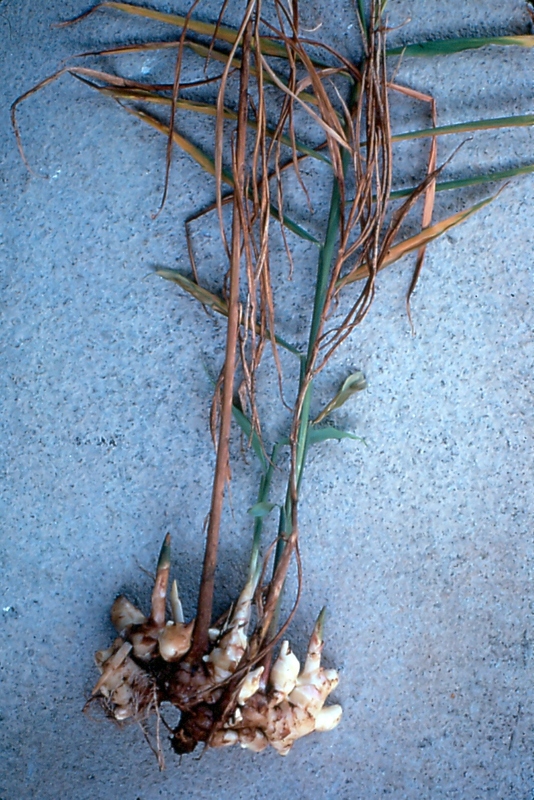 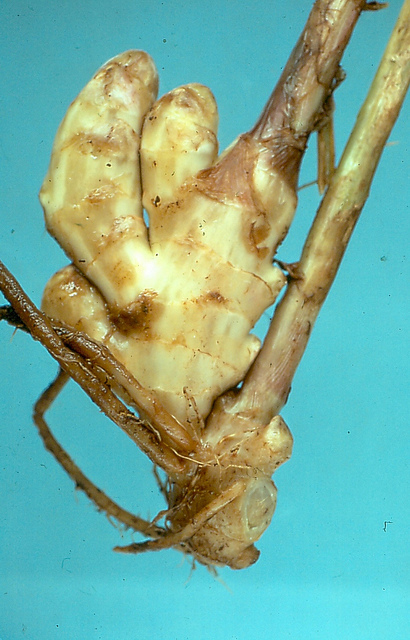 Green leaves infected with the pathogen roll and curl ("green wilt"); leaves turn yellow then necrotic; plants become stunted and die; rhizomes are discolored and water-soaked and may be rotting inside.

Disease is spread via movement of infested soil; bacteria survive in the soil on plant debris.

Plant ginger in well draining soils where ginger had not previously been grown; plant only pathogen free seed; plant ginger on hills to aid soil drainage and promote air flow around the rhizome; rotate ginger with non-hosts of bacterial wilt.

Treating seed with Bordeaux mixture prior to planting and solarizing the soil can help to reduce the incidence of the disease.

Disease favors warm, moist soils; spread primarily through use of infected seed pieces which may not show any outward signs of disease.

Plant ginger in well-draining soils or on hills created by tilling; do not plant any seed pieces which show symptoms of disease; seed pieces can be treated with hot water (50°C/122°F for 10 min) or appropriate fungicides prior to planting; destroy all crop debris after harvest; keep fields weed free; do not grow ginger for more than one year in same area. 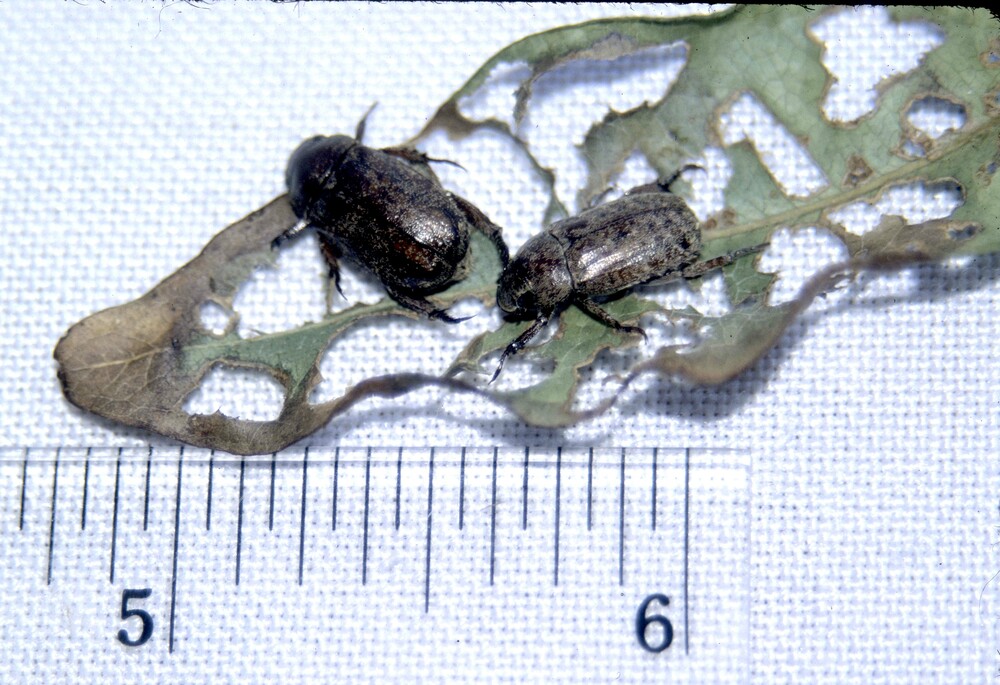 Chinese rose beetles (Adoretus sinicus) and their feeding injury (windowing) on a leaf. 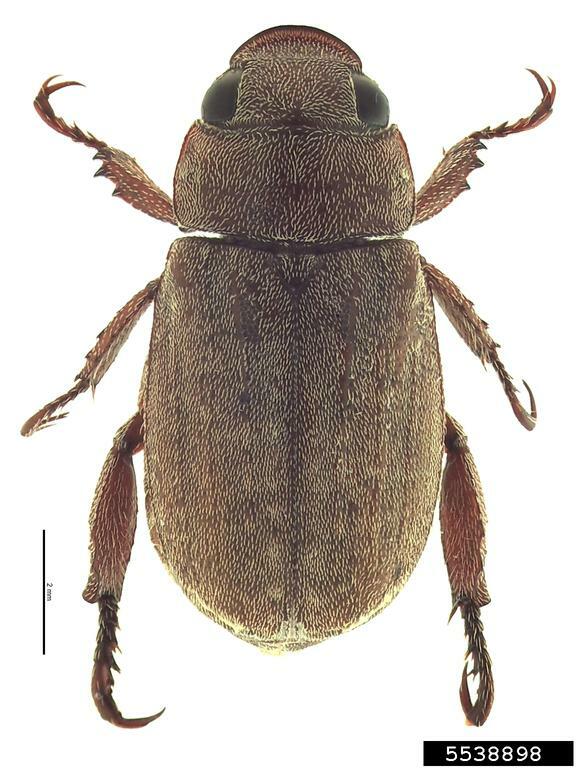 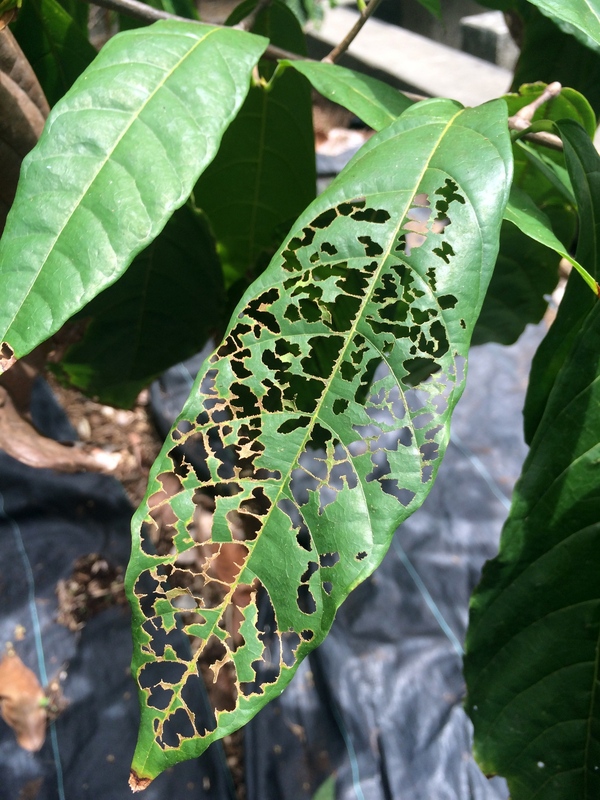 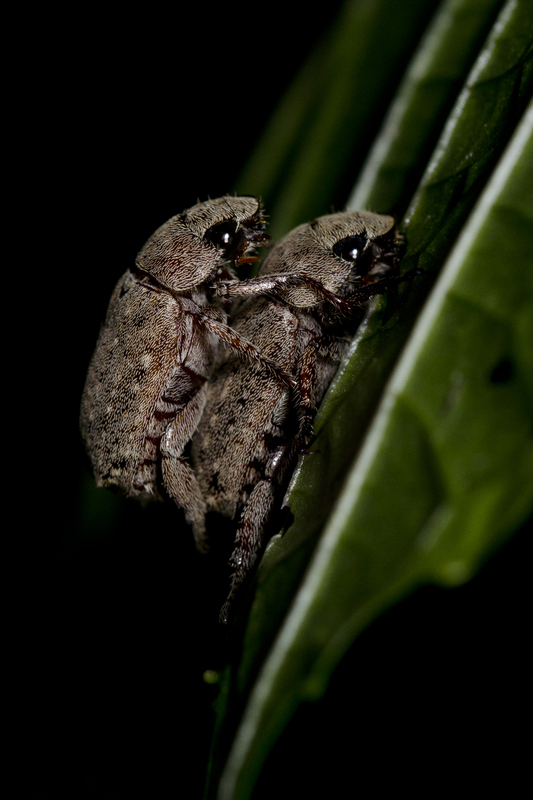 "Shot-hole" appearance of leaves; entire leaf consumed with the exception of the leaf veins; adult insect is a reddish-brown beetle which feeds on plants at night.

Chinese rose beetles are attracted to dim light and repelled by bright light, shining bright light on plants may help deter them from feeding; covering young plants with e.g. floating row covers can help to protect plants until they are old enough to withstand attacks by the beetle. 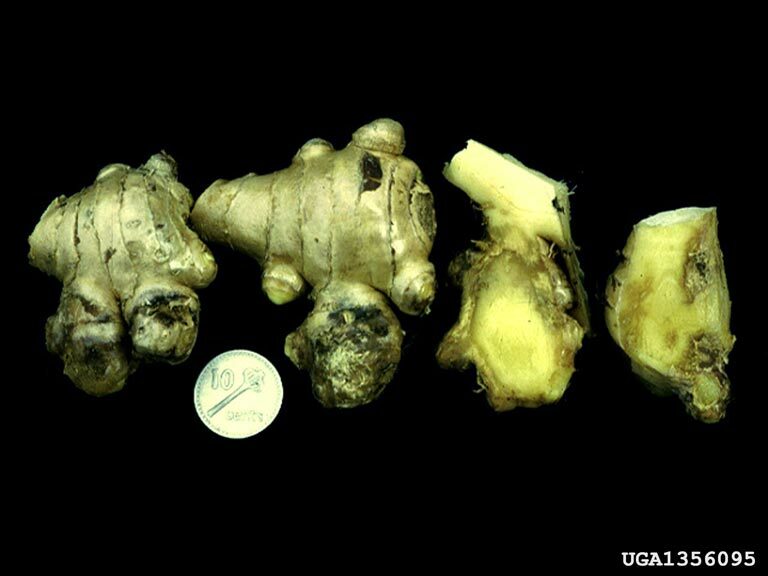 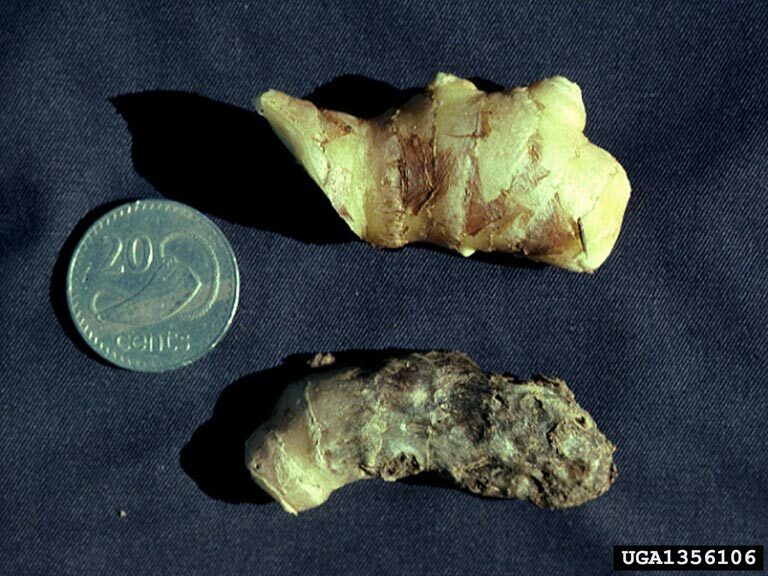 Damage due to burrowing nematode 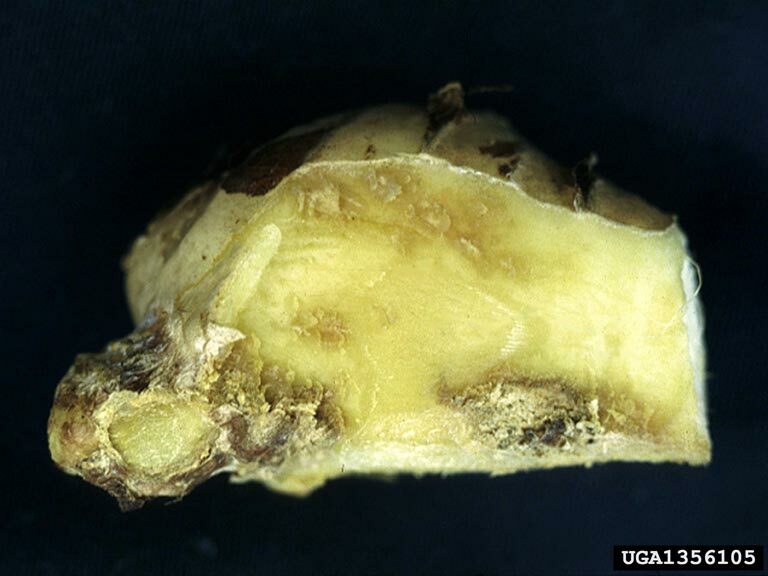 Root knot nematode: Water soaked lesions on roots; Galls on roots which can be up to 3.3 cm (1 in) in diameter but are usually smaller; reduction in plant vigor; yellowing plants which wilt in hot weather. Burrowing nematode: The appearance of small, water-soaked shallow lesions on rhizome which later turn brown. This lesion merges together and leads to rotting. Infected plants show yellow leaves with less number of shoots and stunted growth.

Galls or lesions can appear as quickly as a month prior to planting; nematodes prefer sandy soils and damage in the areas of the field or garden with this type of soil is most likely.

Plant resistant varieties if nematodes are known to be present in the soil ;check roots of plants mid-season or sooner if symptoms indicate nematodes; solarizing soil can reduce nematode populations in the soil and levels of inoculum of many other pathogens. Treating rhizome with hot water (51°C for 10 minutes) before planting reduces burrowing nematode problem.