Kiwi, Actinidia deliciosa, is a deciduous climbing vine or shrub in the the family Actinidiaceae grown for its edible fruits. The plant is vigorous and woody with nearly circular leaves which have long petioles and are alternately arranged on the stems. Young leaves and shoots are covered in tiny red hairs, while mature leaves are smooth and dark green on the upper surface and white and downy on lower surface. The kiwi plant produces fragrant white-yellow flowers singly or in clusters of 3 at the leaf axils (area between leaf and stem). The fruit is oval or ovoid in shape with green-brown skin covered in stiff brown hairs. The flesh of the fruit is bright green and juicy with many tiny black seeds. Kiwi plants can reach a height of 9 m (30 ft) and have an economic lifespan of 3 years, after which time fruit production begins to decline. Kiwi may also be referred to as kiwifruit or Chinese gooseberry and originates from China. 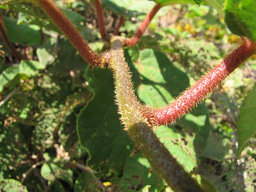 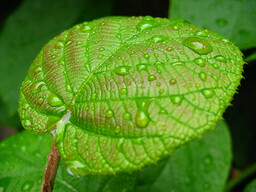 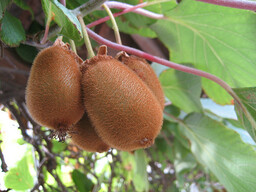 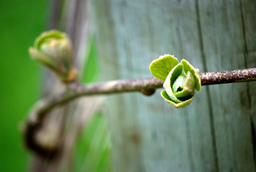 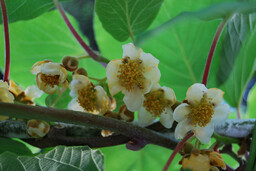 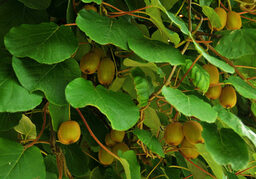 Kiwis are primarily consumed as a fresh fruit.

Basic requirements Kiwi plants are native to warm, forest regions of China and require a long growing season with 8 to 9 month with no frost. The optimal temperature during the growing season is between 14 and 24°C (57.2–75.2°F). The plant can tolerate cold but is damaged by temperatures below -8°C (17.6°F). Some varieties of A. deliciosa, such as the Hayward cultivar will tolerate temperatures down to -10°C (14°F). In general, kiwifruit vines will grow best when planted in deep, well-draining, sandy loams as they are extremely sensitive to standing water. The optimum pH for the soil is between 5.5 and 6.0. In addition, kiwifruits require a plentiful supply of water during production and the vines require the support of a trellis to support the weight of the growing fruit. Kiwi should be planted in full sunlight to ensure optimal productivity. Propagation Kiwis can be propagated by a variety of methods, including growing from seed or from hard or softwood cuttings or root cuttings. The easiest method of propagation is the use of softwood cuttings. The cuttings should be taken during the summer months when the tree is actively growing. Each cutting should be taken from the current season’s growth and should possess 2-3 nodes (leaves). The leaves must be fully expanded in order for the cutting to be successful, cuttings should not be taken from immature growth such as at the end of shoots. once the cuttings have been obtained, they should be stripped of all but the top-most leaf. Rooting hormone can be used to aid the cuttings in developing new roots. Those containing indole-3-butyric acid have been shown to be most effective in kiwi propagation. After treatment with rooting hormone, the kiwi cuttings should be planted in beds or small pots, preferably in a glasshouse, and kept moist. When the cuttings have began to develop new shoots, they should be transferred into 1 gallon pots containing a high quality potting soil and watered daily. The potted plants should be fed with a slow release fertilizer at least twice over the growing season. Planting If the kiwi vines are to be grown on a trellis or pergola, this should be constructed prior to planting. Kiwi should be planted by digging a planting hole which is at least three times the width of the current pot that the plant is in. Individual plants should typically be spaced 5 m (16.4 ft) apart when using a T-trellis system but can be planted closer together when vines are managed by pruning. Approximately 6 m (19.6 ft) should be left between rows. This distance is again dependent on the training system being utilized. Almost all kiwi species are dioecious and require the presence of both a male and female tree in order to set fruit. The recommended planting ratio is 1 male to every 8 females but a higher density of male trees will increase productivity. General care and maintenance Kiwis have a high nutrient demand, particularly for nitrogen and potassium. after the first year of planting, plants should be fertilized in the Spring and as required throughout the growing season with the type and amount of fertilizer depending on the particular soil type and the age of the vines.

Vines may completely collapse; whit mycelial mats may be present under bark close to the soil line; cortical tissue has a dark discoloration and white mycelial strands are present; root-like rhizomorphs extend from roots into soil

Ensure that land to be used for new kiwi plantings is completely cleared of roots which are greater than 1 inch in diameter; ensure kiwi vines are adequately irrigated but not overwatered

Control of the disease relies on the avoidance of injuries to the plant which allow bacteria to enter; there are currently no recommended chemical control strategies for the disease

Disease has a wide host range; bacteria overwinter on vines

Infected areas should be pruned by cutting 1 foot below the edge of the canker; disease severity can be reduced by protecting plants from freeze injuries over winter

Bacteria enter the plant through wounds

Control of the disease relies on the avoidance of injury to kiwi vines; existing galls can be surgically removed

Reduced shoot growth; small, chlorotic leaves; vines may collapse suddenly or show a gradual decline in productivity over several seasons; red-brown discoloration of roots and root crowns which is visible when root is cut in two

Control of the disease is reliant on good water management and application of appropriate fungicides; kiwi should be planted in well-draining soils where water does not pool after rain or irrigation; plants should be allowed to dry out between irrigations