Please note that to understand the role of wind is complex and people should contact Keth for operational advice. The data here is presented to encourage researchers on ways to improve the model

PlantVillage at Penn State created the eLocust3m for UN FAO to help them gather data on locust occurrence. As the Desert Locust moved into countries like Kenya and Uganda which do not have dedicated systems to survey for locusts it became necessary to engage communities who have limited experience. Therefore a simpler reporting tool, eLocust3m was developed. This is a crowdsourced approach. Other approaches which PlantVillage have been engaged with include the dedicated hotline locust with Shmaba Shape Up and work with ATA in Ethiopia.

Here the goal of this page is to continue crowdsourcing but among the community of data scientists, machine learning engineers, acardiologists earth observation scientists and geographers.

The dashboard shows observations collected primarily through the  PlantVillage eLocust3m app. The data along with data from other sources can be downloaded from the LocustHub https://locust-hub-hqfao.hub.arcgis.com/

The original data contains both positive and negative locations (so areas where searches for locusts were conducted but none were found); only positive locust reports are shown in dashboard. 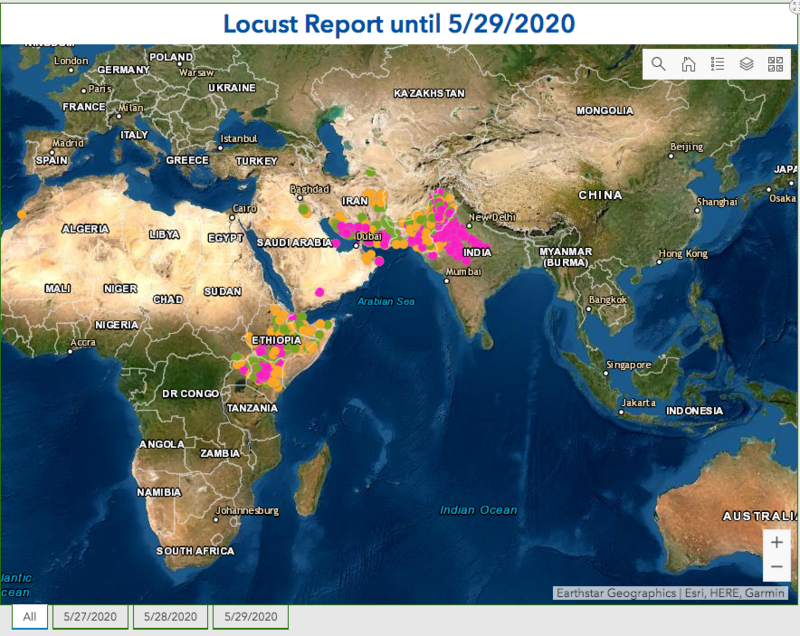 For observations in the last three days we also present the details on soil moisture from The Soil Moisture Active Passive (SMAP) mission from Nasa.  is an orbiting observatory that measures the amount of water in the surface soil everywhere on Earth. The SMAP observatory is a dedicated spacecraft with a rotating 6-m lightweight deployable mesh reflector. The radar and radiometer share a common antenna feed. 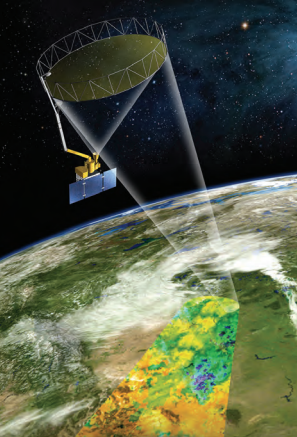 Why is the moisture of the soil important

Biologically the reason for including soil moisture is that it is a critical component in the lifecycle of the Desert Locust.  Moist sandy soil is needed for egg laying and successful hatching of the eggs.

"Eggs are usually laid in areas of bare sandy soil. Generally, the female will not lay unless the soil is moist at about 5-10 cm below the surface. In soft sandy soils, females have been known to lay when moisture is only found at depths below 12 cm. Before laying, the female will often probe the soil, inserting the tip of her abdomen to determine if there is enough moisture. It is important to realize that laying is not always taking place when the females are seen probing. The only sure test is to dig into the ground to check whether eggs have been laid.

The female lays eggs in batches called egg pods. The eggs look like rice grains and are arranged like a miniature hand of bananas. Once the female determines there is enough soil moisture, she bores into the ground with the valves at the rear of her abdomen and deposits a batch of eggs (see Fig below). She then fills up the hole above the eggs with a plug of froth. The pod is 3-4 cm long and is laid so that its top is about 5-10 cm below the surface. This depth requires a great extension of the female’s abdomen. The Desert Locust lays pods containing fewer than 80 eggs in the gregarious phase and typically between 90 and 160 in the solitarious phase.

Swarms often lay egg pods in dense groups, with tens and even hundreds of pods per square metre. The males, together with those females that are not ready to lay, may move on. As a result, large swarms split up and males may become separated from females. Laboratory tests show that a laying female leaves a scent that attracts others to lay nearby. In the field, however, it is thought that sight is more important than scent in attracting females to those already laying. This behaviour means that laying occurs in only a small number of the apparently suitable sites. Such behaviour as well as an agent added to the egg pod foam when adult females are crowded will help induce gregarization of the next generation.

The number of egg pods a female lays depends on how long it takes for her to develop a pod and how long the female lives. The time between layings in the field is about ten days. Adults become rare some six or seven weeks after the first well synchronized laying except perhaps where temperatures are low. This suggests that nearly all females will lay one pod, about 75 percent will survive to lay a second, and perhaps 25 percent to lay a third but very few will manage to lay four pods. An average of two pods per female is the norm.

Because of natural mortality, not all the eggs that a female lays hatch and those that do hatch do not all reach the adult stage. In optimal temperature and habitat conditions, multiplication rates can be as high as 16-20. In other words, a single female can produce up to 16-20 viable locusts in a single generation."  FAO 2001 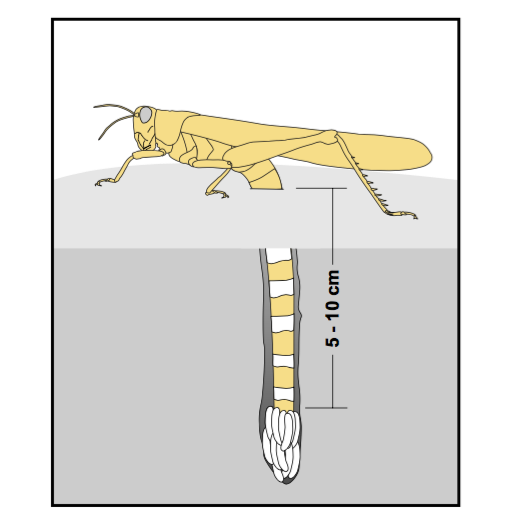 On the hopper transition map, our goal is to estimate when and where hoppers are maturing into adults. Locusts develop in three life stages: an egg, followed by a wingless larva or nymph known as a hopper, then finally an adult. The hopper stage does not fly, providing an opportunity to implement control measures before the locusts mature into swarming adults traveling large daily distances.

Hoppers pass through 5-6 instars before becoming an adult. At the final molt from the last hopper instar, hoppers develop into new adults known as fledglings. The wings of fledglings are not fully developed so they do not begin to fly until about 10 days after this final molt.

On our map, we estimate the:

fledging date: by this date, hoppers have developed into immature adults unable to fly. We expect hoppers to be around the same location as originally observed by this time.

flying date: by this date, locusts should have fully developed wings and are capable of swarming. Locusts likely have moved from where originally observed by this time.

Currently, our estimates are based on the average duration between instars and the date the hopper was observed. Instars 1-4 (L1-L4) typically take 6-7 days per instar, while the last instar (L5) is typically about 10 days. We estimate minimum dates by assuming the hoppers were observed on the first day of their current instar, maximum dates assume hoppers were in their final day of that instar, and average dates assume hoppers were observed in the middle of the their development at that instar.