Go Back
This page is available in French.

Oil palm, includes the palm species native to Africa, Elaeis guineensis, and the species native to South and Central America, Elaeis oleifera. Both species are perennial tropical trees in the family Arecaceae which are grown for their oil which is used in cooking and in industry. Oil palm trees are unbranched with a long stout single stem, or trunk, terminating in a crown of 7–100 leaves. The leaves are pinnate and can reach 3–5 m (9.8–16.4 ft) in length. The tree produces large, spherical red fruits in bunches. Up to 200 fruits can be produced per bunch and and the oil is extracted from the pulp and kernel. Oil palm can reach heights of 20–30 m (65.6–98.4 ft) and has an economic lifespan of 25–30 years, at which point they become too tall to be managed efficiently and are cut down. Left alone, oil palm has been known to live for periods up to 200 years. Oil palm may also be referred to as African oil palm and originated from West Africa. 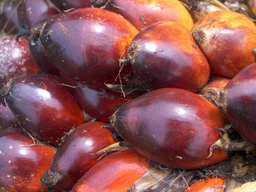 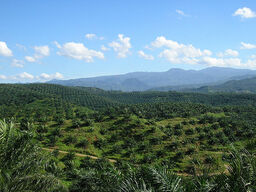 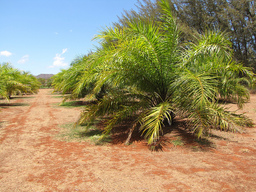 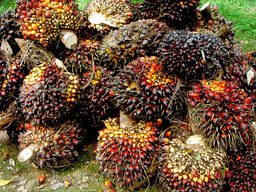 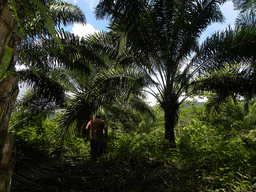 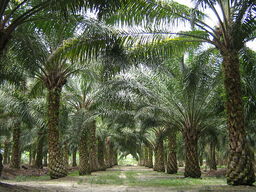 Palm oil is widely used as a cooking oil, as an ingredient in many processed foods and as a substitute for butter. Palm oil can be used to produce biodiesel. Palm oil is also used as a binding agent in cosmetics.

Basic requirements Oil palm is typically grown in tropical lowland regions over large areas. The tree requires deep soil and stable high temperatures (30–32°C/86–89.6°F for at least 80 days) for optimum productivity. Temperatures below 20°C (68°F) will severely reduce the growth of both species, while the African oil palm will also suffer a reduction in growth at temperatures above 40°C (104°F). Palms will grow in a variety of deep tropical soils and will tolerate a pH between 4.0 and 8.0. Oil palms have a requirement for continuous moisture throughout the year. The trees can tolerate 2–3 months of dry conditions but it can affect yields. Propagation Trees are propagated from seed and are germinated prior to planting by moistening them and and placing them in a small box within a polyethylene bag placed in a germinator. Once the seeds have germinated they are allowed to grow further in a pre-nursery (a prepared bed, tray or container with fertile soil). The seedlings are then planted on into a nursery where they will be allowed to grow for a further 6–12 months before they are planted in the field. Field seedlings are planted in the field allowing 9 m (29.5 ft) between trees and an additional 9 m (29.5 ft) between rows. Trees will begin to bear fruit after 3–4 years. General care and maintenance Oil palms are frequently planted along with a leguminous cover crop which helps provide nitrogen to the palms while also suppressing weeds. When bunches are harvested, it is usual for fronds to be pruned. The number of fronds per palm is maintained at between 35 and 40. Oil palm plantations are rarely, if ever, irrigated. Due to the moisture requirements of the palms, supplemental irrigation is recommended during dry spells. Harvesting Harvesting of oil palms generally begins 2.5 years after the trees are planted in the field. Harvesting takes place throughout the year, usually at 2–3 week intervals, as the bunches ripen. Bunches are harvested by cutting from the tree using a sharp knife or sickle. 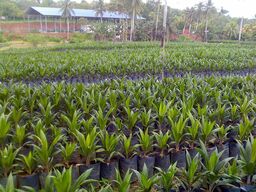 Parts of spear leaf petiole or rachi turning brown; discoloration may be associated with a wet rot; spear leaf may be wilted and/or chlorotic; leaves may be collapsing and hanging from the crown; infection of the bud results in buds becoming rotten and putrid, leading to death of the palm

Plant oil palm varieties with resistance to the bacteria; rotting tissue on spear leaves should be removed to prevent bacteria spreading to buds; palm buds can be protected using copper-based fungicides

Reduced growth of palm, pale green foliage, older fronds turning chlorotic or necrotic; drooping fronds; on mature oil palms, spear leaves do not open, seedlings may exhibit a one-sided chlorosis or necrosis of the lower fronds; cross-sections of lower portion of trunk reveal a discoloration and softening of the central area and a distinct boundary is present between healthy and diseased tissue

There are currently no fungicides recommended for protecting palms from Ganoderma butt rot; palms should be monitored closely for signs of disease, especially if a palm has died or been removed nearby as fungi can colonize old stumps and release spores; infected trees should be removed as once symptoms are present in foliage, a large portion of the trunk is already rotted and the palm is unstable; do not replant palm in soil where an infected palm has been removed

Symptoms of the disease vary with age of host; disease can affect seedlings and mature trees; seedlings exhibit retarded growth, reduced leaf size, chlorosis of older leaves and tip necrosis; field palms may exhibit a bright yellow chlorosis of leaves in the mid-canopy which starts at the tip pf the pinnae and moves towards petioles before affecting adjacent fronds and spreading to older leaves in the canopy; in older palms, lower leaves wilt and dry out and fronds break close to the base of the trunk; new fronds are chlorotic and stunted; the palm shows decline on one side and develops symptoms in the lower canopy; infection spreads rapidly upwards and infects the bud, killing the palm

International quarantine procedures have limited the spread of the disease between major palm oil producing countries; dead or dying trees should be felled and burned to prevent spread in plantations; if palms are replanted then new palm should be planted a distance of 3.9 m from infested stump; soil within a 3 m radius of infested stumps should be treated with dazomet and covered for a period of 30 days

Disease has been reported worldwide

If palm is severely diseased, it should be removed from plantation and destroyed; palms should be planted with adequate spacing to allow air to circulate between trees; remove weeds from around palms; applications appropriate broad spectrum foliar fungicides can help to protect the palms from disease

Flattened oval to round disc-like insect covered in waxy substance on tree branches; insects attract ants which may also be present; insect colony may also be associated with growth of sooty mold due to fungal colonization of sugary honeydew excreted by the insect; symptoms of direct insect damage not well documented

Insects have a wide host range; often tended by ants which farm them for their sugary honeydew secretions; transmit Cocoa swollen shoot virus

V-shaped cuts in palm fronds or holes in leaf midribs caused by beetles boring into crown to feed; adult insect is a large black beetle with a curved spine on its head; larvae are creamy white grubs with brown heads and 3 sets of prolegs at the anterior (head) end

Beetles are nocturnal and fly at night; also a damaging pest of oil palm

Destroy any decaying logs in plantation by chopping and burning to kill any larvae that may be inside; remove any dead trees from plantation and destroy by burning; plant a cover crop to deter egg laying by females as they do not lay eggs in areas covered by vegetation; hooked wire can be used to extract larvae that are boring into young crowns