0
points
What to do against Japanese Beetles on grapes

My grapes are suffering badly from japanese beetles that seem to have taken over the plants - see images below.

Does anyone know how to solve this problem - i.e. how can I get rid of the beetles before they start killing off the other plants? 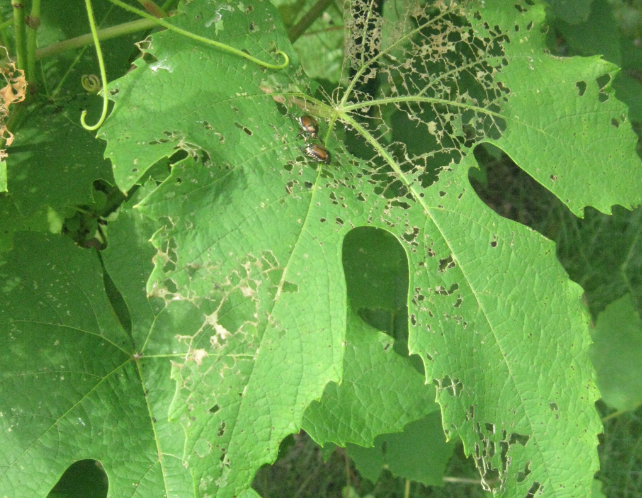 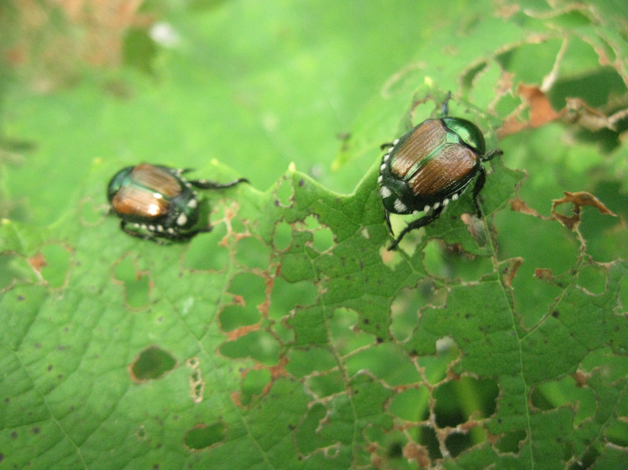 
Answers
2
points
Whoa! Have to disagree with David about the traps and milky spore disease.

Every entomologist I know suggests giving the traps to your neighbors rather than setting them in your own yard or garden. Japanese beetles (JB) are strong flyers and may breeze in from miles around to sample the attractant, but this may help your neighbors more than your grapes. Research shows that the traps attract many more JBs than they catch.

Around here, milky spore disease doesn't work very well at controlling these pesky beetles: http://bit.ly/12Yuvcn, http://bit.ly/1328pkx It's specific for JB grub (larvae) control, and many lawns don't even have grubs, even though fruits, vegetables, and ornamentals on the property have suffered a serious JB infestation that season. Don't waste your time and money on a control you might not need.

Sadly, grapes are among the JB's favorites, which means trap crops probably won't serve you too well.

The soapy water treatment is probably as effective as pesticides, maybe more so. If your planting is small, you might also try creating an exclusionary barrier by covering the plants with cheesecloth or other very fine light- and rain-permeable netting while the beetles are most active.

David Hughes commented, Disagree away. That is all good for the original poster. Glad to hear of your experience on traps. Do though consider this post that Tanya in the Garden posted http://gardenrant.com/2013/07/japanes...

But we do agree that an aggressive checking of leaves with a bucket of soapy water is the most effective to reduce damage now.

thanks
over 7 years ago.

2
points
I think the best way to protect the grape leaves would be to cover with a light barrier. That said: We have used milky spore in the past and HAVE found it to reduce the numbers of JB. I know that we did not have a huge grub problem but the MS still helped.. It got better over a couple of years. If you have an area nearby that is grassy..ie: a park or farmland they may be harder to control. DO NOT put those traps into the area.. the pheromones only attract more than you want and they can then breed and you end up with more.

2
points
The industry thinking is that they go after shiny-leaved varieties more than others. That means, Seyval and Vidal, etc. That may be the case, but if all you have are vinifera, they'll eat you alive.

Sometimes a grower will think, "Sure, they're eating some leaves, but I was going to have to trim them anyway." This is bad thinking. Japanese beetles are not trainable, and will not stop when you want them to.

What I have found works best is a spray of carbaryl (Sevin) at the first sight of beetles. In most years, this is enough. Yes, it's a broad-spectrum insecticide, but it's the least harmful to humans, and is very effective. Years like 2013 and 2005 were tougher because of the major cicada broods that came out. JB predators preferentially went after them rather than JBs....meaning that next year there will be a slightly elevated population again.

Without leaves, we can't ripen fruit. It's a tough choice to make, but I don't know of a commercial grower who places any stock in milky spore or traps. Sevin has a 14-day PHI and is effective for only seven days. Usually enough to knock the population down (except for this year.)

1
point
I haven't dealt with them myself, but according to a recent discussion on Garden Rant, you can try traps. For next year, try milky spore, nematodes, Btt, trap crops, or plants that lure beneficials.
http://gardenrant.com/2013/07/japanes...
I also read somewhere about vacuuming them up!

Peg Boyles commented, Interesting essay, Tanya. Sorry I didn't read it before I posted. It'll be interesting to see how Roush's roses fare for a couple of seasons after setting these traps.

We seem to have many fewer Japanese beetles this season than in previous 3-4. But still mostly on beans & raspberries, as usual.
over 7 years ago.

1
point
They are highly seasonal and once they appear will be gone in four weeks. However, they might take all the leaves of your grapes with them so urgent action is needed as you recognize. Get a bucket of soapy water and go around all the leaves brushing them into the water. Early morning and dusk when it is cool is a good time as they aggregate.
If you order quickly you might get traps which lure in adults. But, by far the most efficacious treatment now is handpicking.

And then plan for next year by putting down the milky spore solution that contains the bacteria, Baccilus. These target the immatures You can also use entomopathoenic nematodes too. See details of both here http://ohioline.osu.edu/hyg-fact/2000...


1
point
If you use the traps, place them 100 feet from the grapes otherwise you will end up attracting more beetles, some of which will go in the traps but others will be happy staying on your grapes. Neem products don't kill the adults but will help repel them. Milky spore and nematodes for the larvae won't help too much with damage by the adults; those are primarily to reduce populations of grubs feeding on roots. The adults are highly mobile and will fly in to desired host plants from a fair distance away.


1
point
I suggest the following which has worked for me in Eastern Ontario over several years. My grapes are "Kay Gray", a white grape bred in Wisconsin for winter hardiness; they are grown over my deck trellis.

Walk round your garden every morning on sunny days in summer, looking for the beetles. Either crush the beetles by hand or grab them & dump in a bucket of soapy water. Fairly disgusting but you'll probably collect dozens. If you catch them on the first few days that they emerge, I find you can control numbers very quickly.

Check the rest of the plants in your garden that they seem to like - I found that the beetles seem to prefer some plants more than the grapes. I use these plants as decoys to concentrate the numbers of beetles making picking more efficient.

Their preference here is for evening primrose, planted in the sun, (not the shade for some reason). Next, they seem to like blackberry bushes. Grapes seem to be next.