Coffee is the name give to several species of plant in the genus Coffea (family Rubiaceae), including C. arabica and C. canephora which are cultivated for their beans (seeds) that are used to make the stimulatory drink. Coffee plants are small evergreen trees or shrubs often with multiple stems and smooth leaves. The leaves are oval in shape and dark, glossy green. Coffee plants produce clusters of cream-white flowers and a fruit, commonly referred to as a berry, which normally possesses two seeds. The fruit is green to begin with but ripens to a crimson red and turns black when dry. C. canephora can reach a height of 15 m (49 ft), but C. arabica is smaller, reaching only 4–5 m (13–16 ft). The trees can live for 20–30 years. Coffee may also be referred to as Arabian coffee (C. arabica) or robusta coffee (C.cenephora) and originates from Africa. 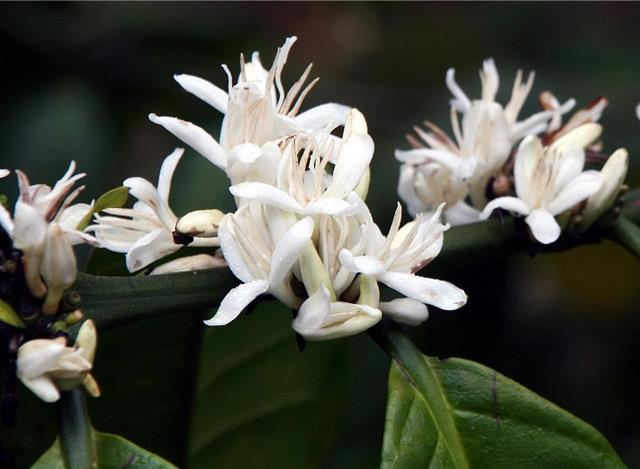 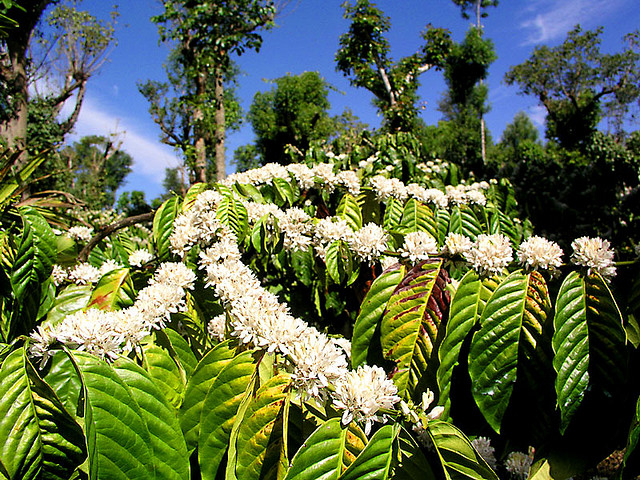 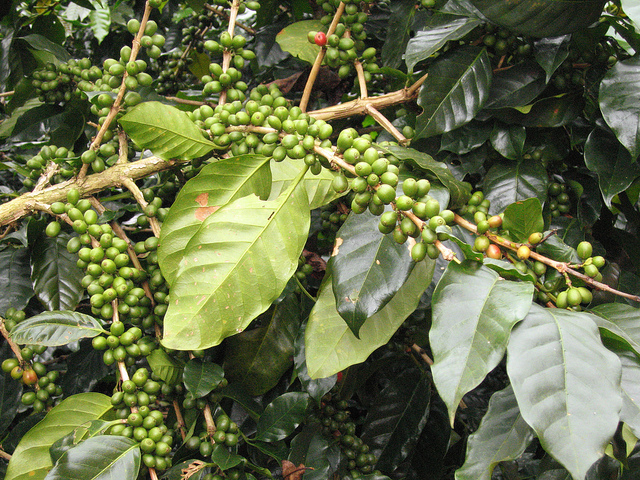 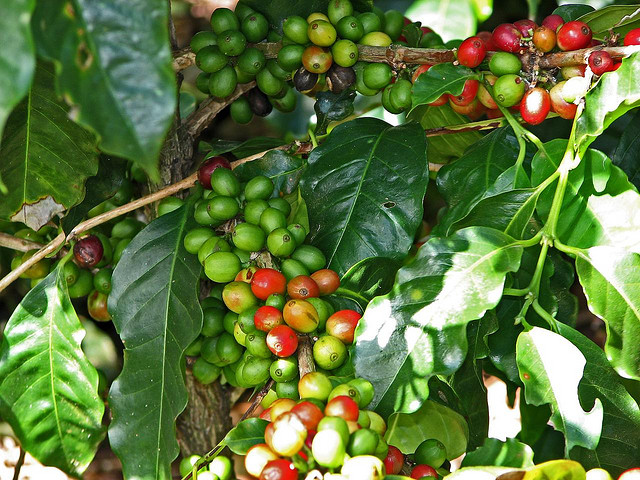 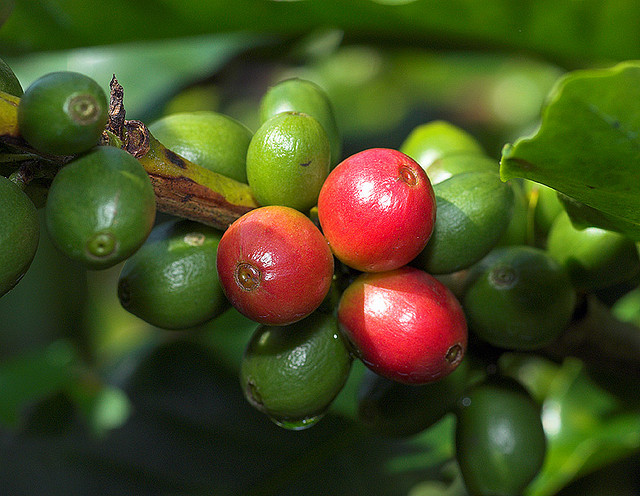 Coffee beans are usually cured, roasted and ground before being brewed with hot water to produce the coffee beverage. The ground beans are often dehydrated to produce instant coffee.

Basic requirements Coffee plants grow best in warm, humid environments. Arabica coffee varieties grow best at temperatures between 18 and 22°C (64–72°F), while Robusta coffee grows best in slightly warmer temperatures of 22–26°C (72–79°F). The plants do not tolerate cold and freezing temperatures will kill the leaves instantly. The plants can grow in a wide range of soils but generally prefer a deep, well-draining loam with a pH between 5 and 6. Seeds Most coffee varieties are self pollinating and can be propagated from seed. Coffee seeds are usually pre-germinated in sand beds before planting in a nursery. The seeds are spread in the sand and covered to keep them moist. The seeds usually germinate within 4-5 weeks. When shoots begin to emerge, they are removed and planted in polyethylene bags or prepared nursery beds. The seedlings are grown in shade and are are ready to be transplanted when they are 6 to 12 months old. Transplanting Young coffee plants are planted in the field in large, pre-dug holes. (50cm × 50cm × 50cm). Various spacings are used in different regions of the world and coffee can be grown as hedgerows or in high density squares depending on the variety. Coffee will usually grow best if planted in rows and plants should be spaced 3 m (9.8 ft) apart. Young trees are delicate and require protection by shading. Shade trees are usually planted before the coffee trees are transplanted (up to a year in advance). 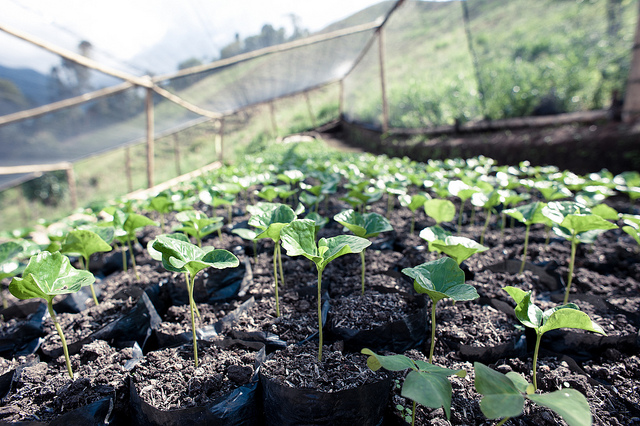 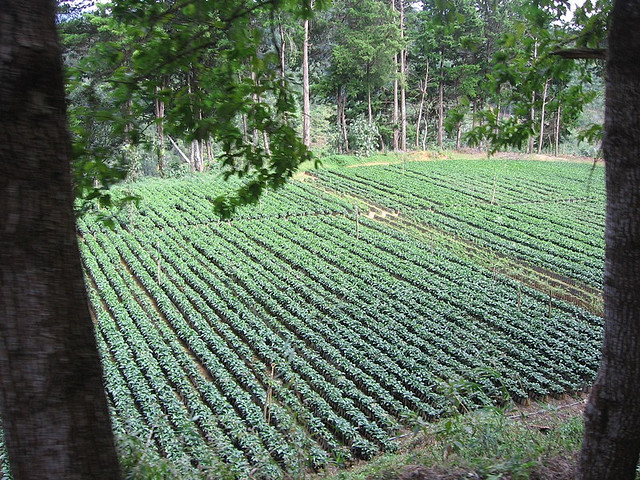 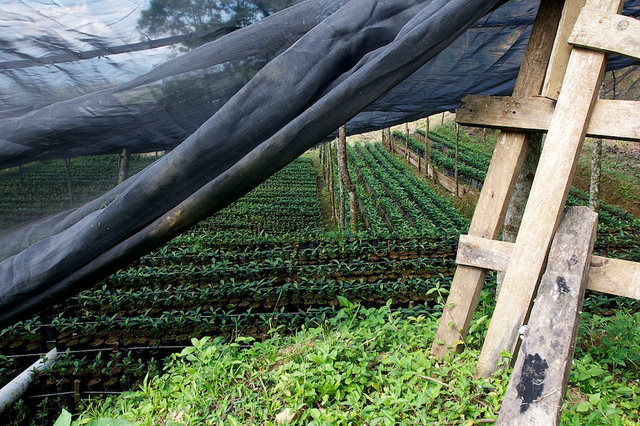 Water-soaked spots on leaves which dry out and become brown and necrotic with yellow halos; necrosis of shoot tips which spreads rapidly down branches; leaves turn black and die off but remain attached to tree

Disease can be spread long distance by the movement of infected seedlings or within the field by water splash; bacteria can enter the plant through wounds 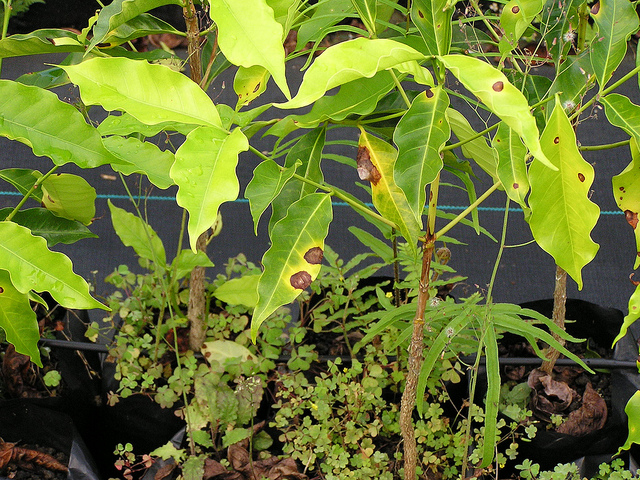 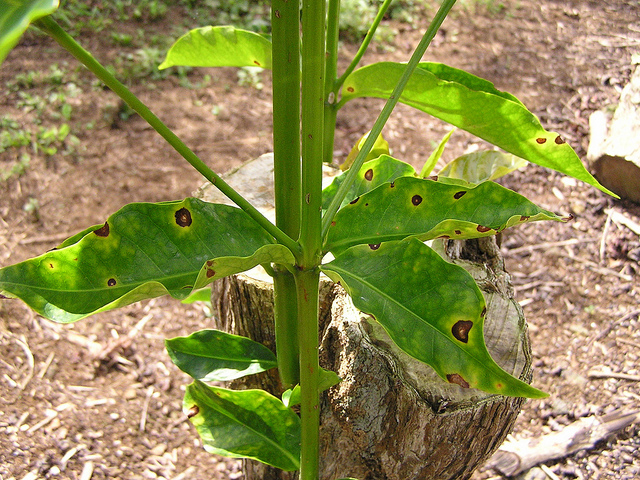 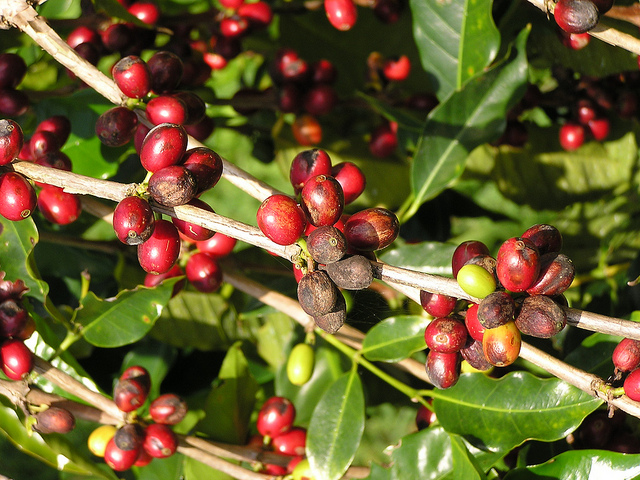 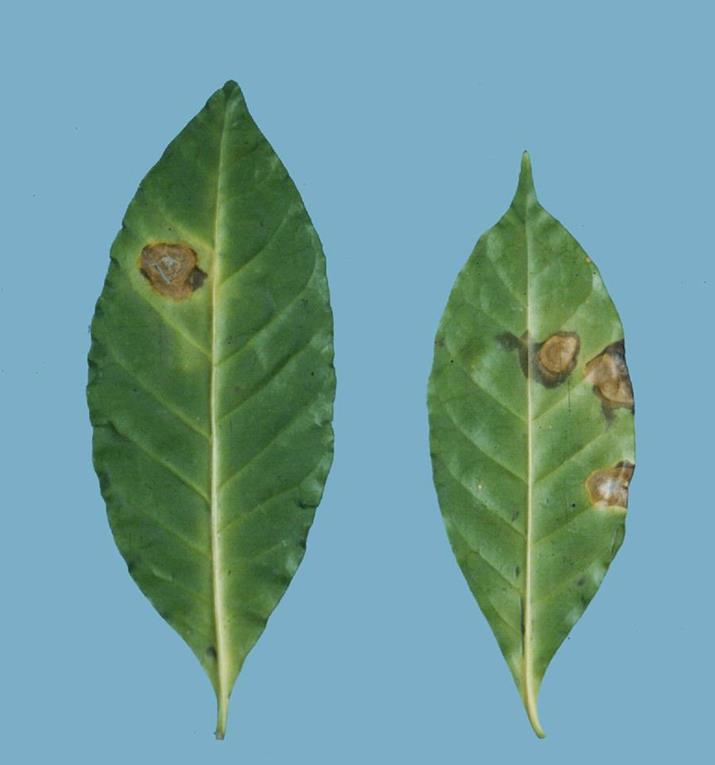 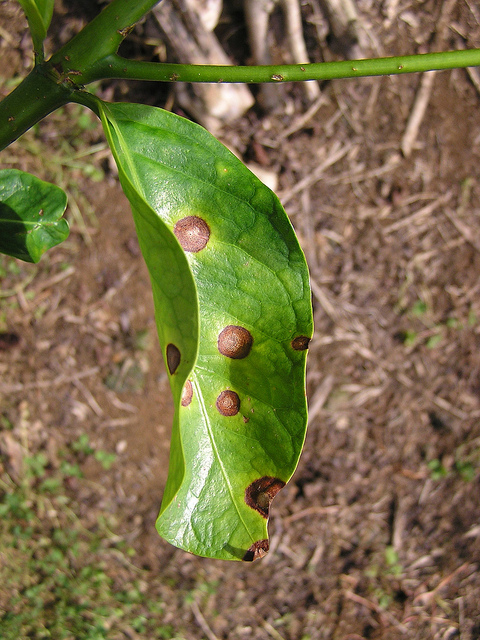 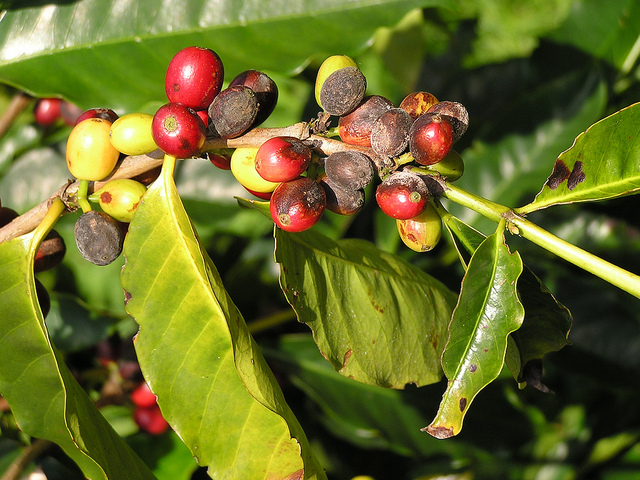 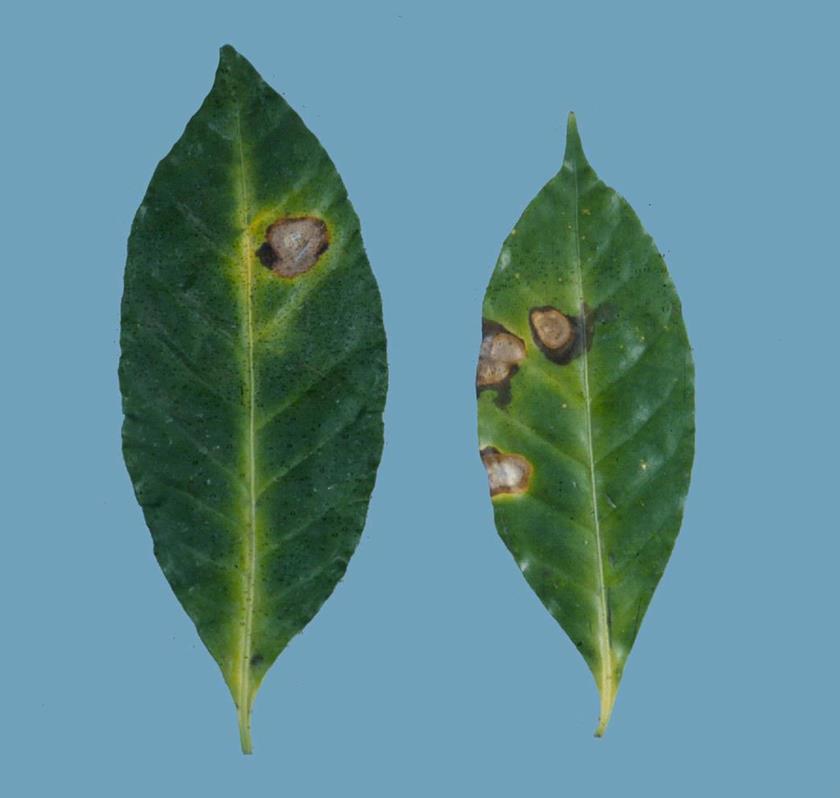 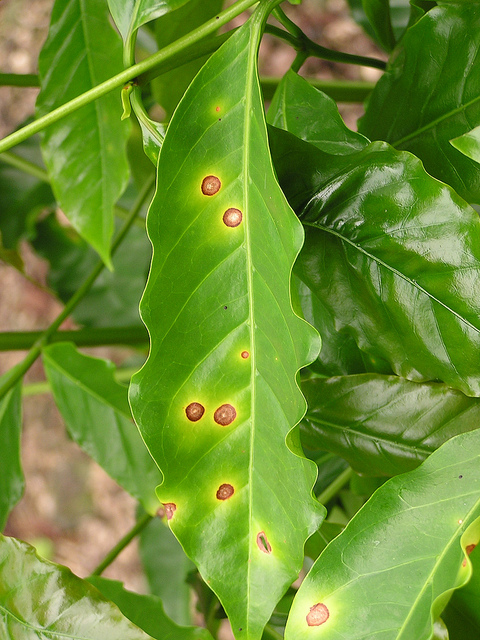 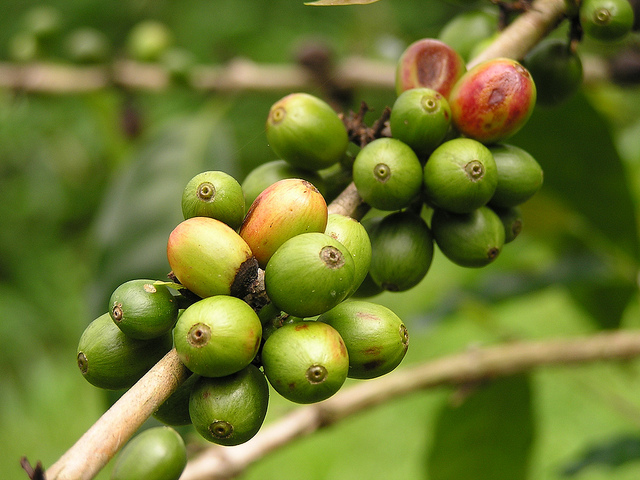 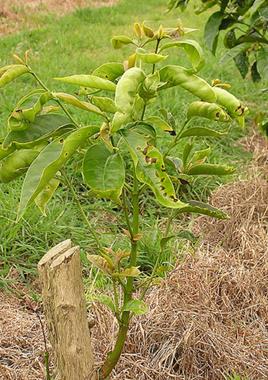 Brown spots on foliage which enlarge and develop gray-white center and a red-brown margin; lesions may also be surrounded by a yellow halo or may have a burned appearance if lesions are very numerous; infected leaves may drop from plant prematurely; lesions on green berries are brown and sunken and may have a purplish halo; infected red berries may have large black sunken areas

Disease can be spread by wind, water-splash and through human movement through fields, particularly when plants are wet

Ensure crop is adequately fertilized as nutrient deficient plants are more susceptible to the disease; remove all crop debris from filed after pruning to prevent build up of inoculum; good plant spacing and pruning to open up the canopy promotes good air circulation around foliage and protects against disease; if disease does occur then it can be controlled with the use of copper fungicides where available 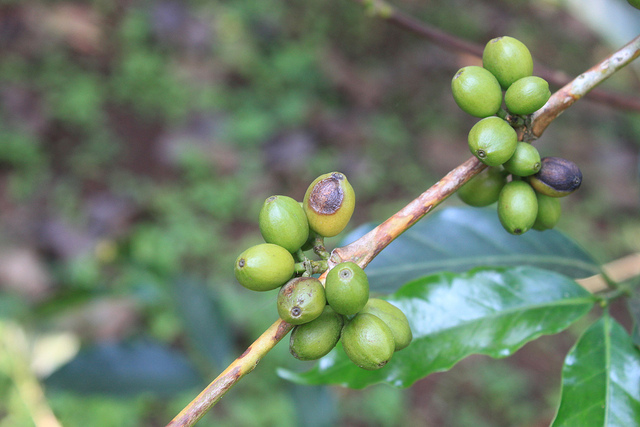 Very serious diseases; can destroy up to 80% of crop

Protective sprays of copper containing fungicides can help to control the disease; any diseased berries should be removed from plants; resistant varieties are available and should be planted in areas where disease is present 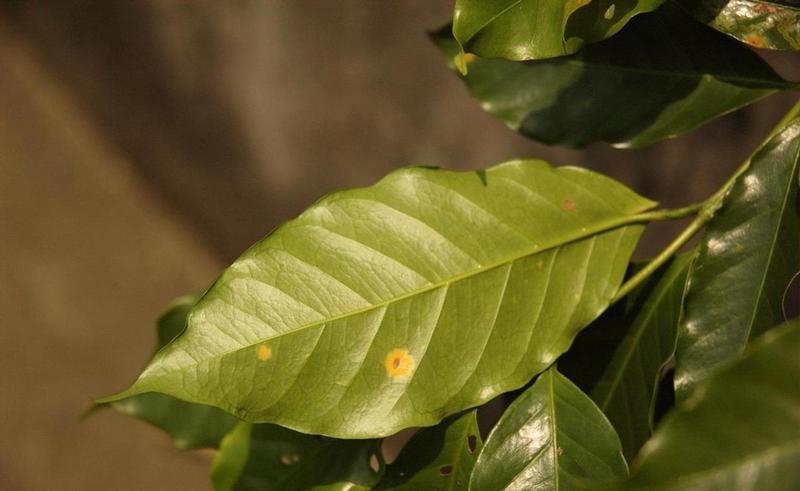 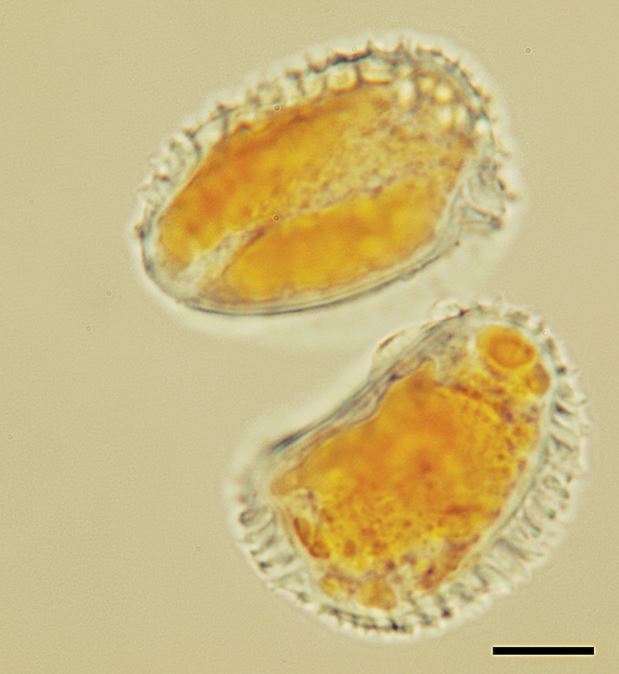 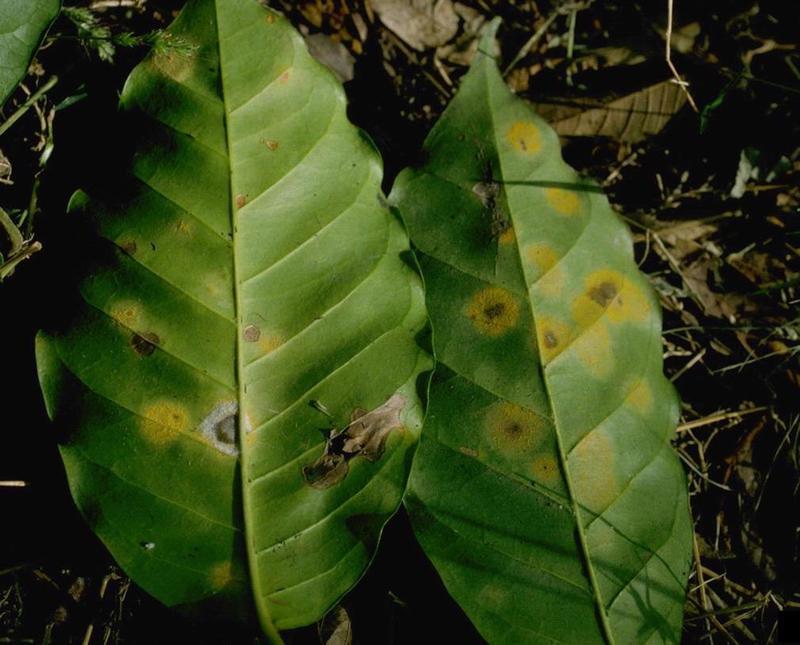 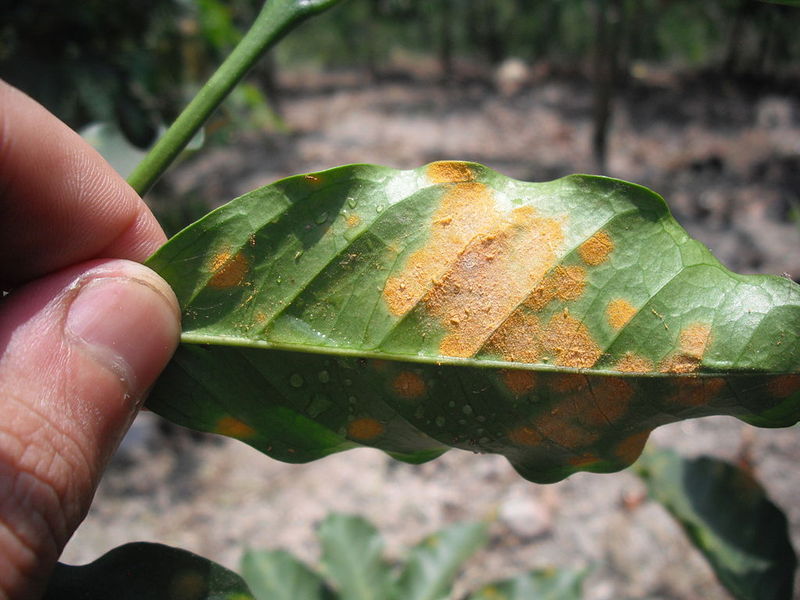 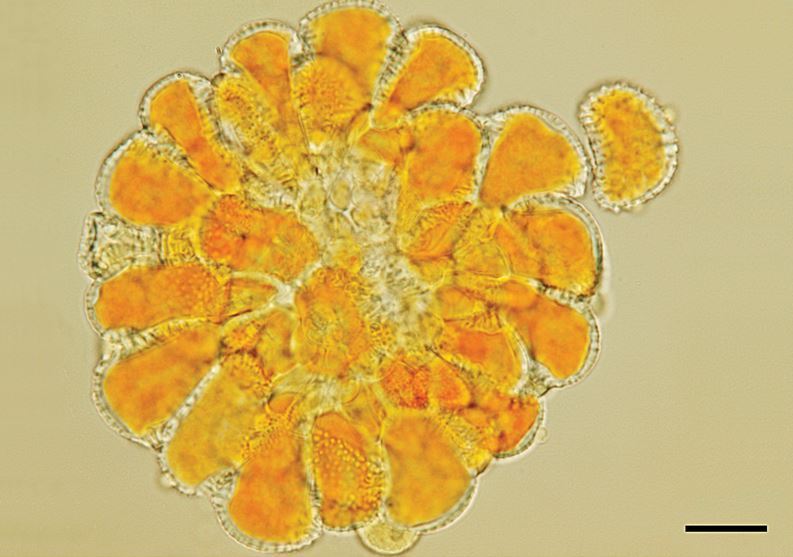 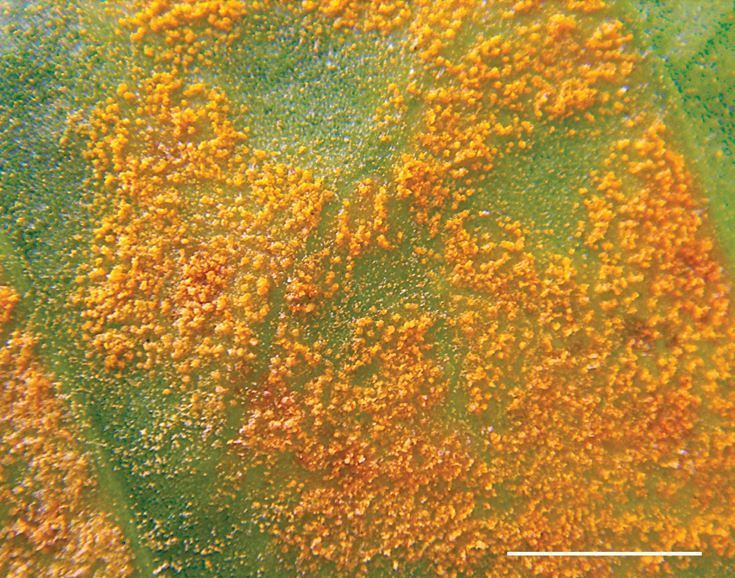 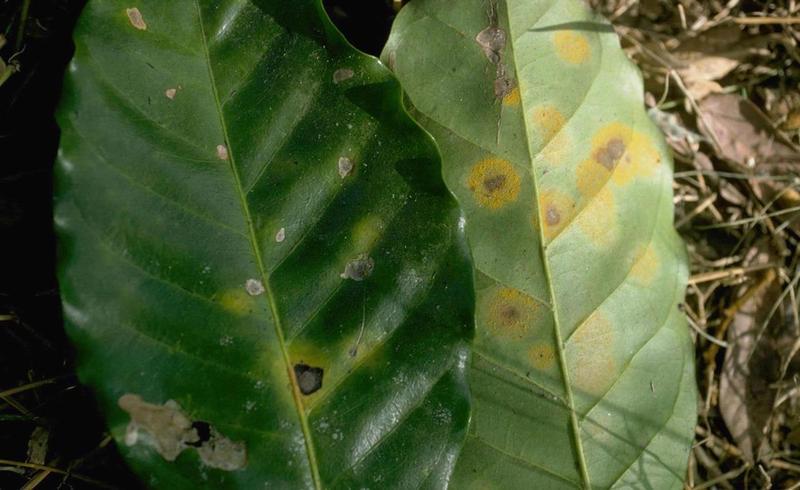 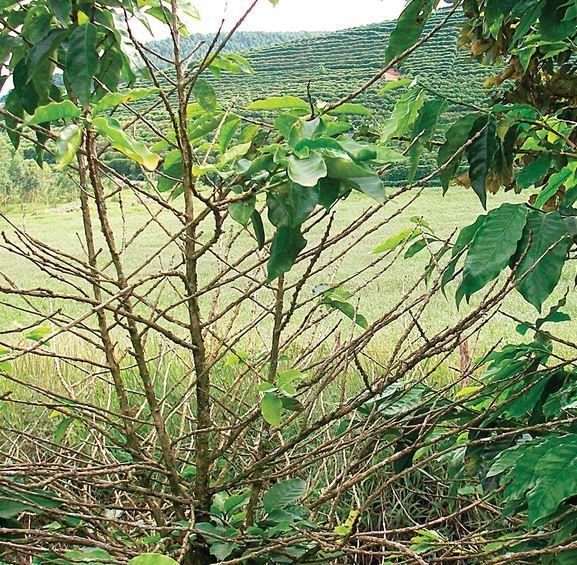 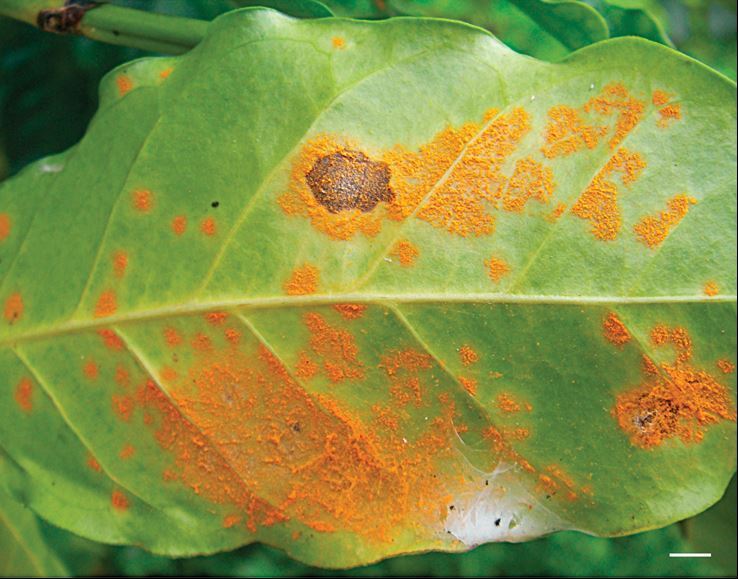 Small, pale yellow spots on upper leaf surfaces followed by powdery orange-yellow lesions on the undersides of leaves; symptoms commonly develop on lower leaves of plant first and then spread; infected leaves drop from the plant and twigs and branches become defoliated 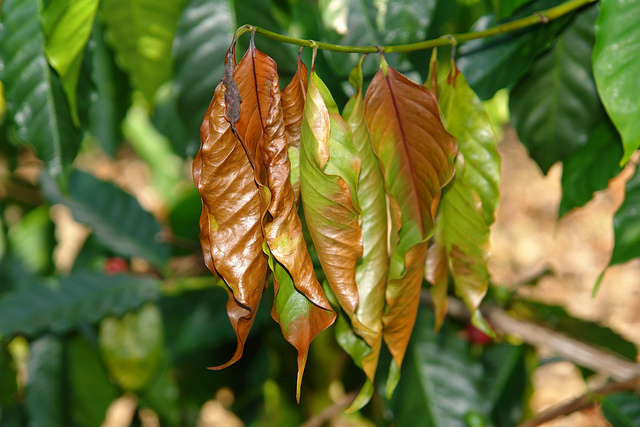 Wilting and yellowing of foliage, often at end of twigs and branches (termed "flagging"); o pin sized hole can often be found on the underside of the flagging stems or twigs where the insect has entered the plant; twigs and stems are hollowed out and can be seen by cutting open the affected tissue; the adult beetle is small and black, approx. 2 mm in length and is rarely seen; eggs and pupae are creamy white in color

Damage caused by the beetles promotes secondary infestation by bacteria and other fungi; adult beetles overwinter in the plant

Prune out infested twigs and stems and destroy; flagging branches should be pruned back a few inches from the beginning of symptomatic areas; adequate fertilizer and irrigation to ensure vigorous plants can speed recovery from pruning injury

Fruit dropping from plants; small holes may be evident on red cherries; when the insect is feeding, debris is pushed out of the hole and forms a brown or grey deposit on top of the hole; adult beetle can be found by cutting open the berry; adult is a tiny black beetle approx. 1.5-2.5 mm in length; larvae are white grubs with brown heads

Female beetle lays clusters of eggs inside the berries; insect undergoes up to 5 generations per year

Removal of dropped berries and debris on plantation floor can help reduce sources of new infections; remove any berries remaining on plants after harvest; insecticide application is only effective if applied when the female beetle is still in the entry tunnel and has not yet penetrated deep into the berry