The international Centre for insect physiology and ecology (ICIPE) was established in 1970 in direct response to the need for alternative and environmentally friendly pest and vector management strategies. ICIPE has its headquarters in Nairobi, Kenya and is mandated to conduct research and develop methods that are effective, selective, non-polluting, non-resistance inducing and which are affordable to resource-limited rural and...Read more

As you no doubt have seen East Africa is threatened by massive locusts swarms. In Kenya, they are the worse people have seen in 75 years. They threaten the livelihood of 19 million people according to the United Nations Food and Agricultural Organisation.

After the last locust upsurge in 2003–2005, FAO developed a tool to enable national locust officers in frontline countries from West Africa to India to record observations in the field and transmit the data...Read more

A fun break from our usual Dream Team blogs, we have an update on travel from the Penn State Team! Engineers, Pete McCloskey and Annalyse Kehs, traveled to India for 2 weeks from January 25 - February 8, 2020. We had the privileged opportunity to attend the Global Potato Conclave. The first 3 days were spent fruitfully engaging with other researchers in the potato space. We learned about new research being done on potato...Read more

“As climate change threatens means of production and the nutrition of the continents people, policies centered around leveraging science and digital technology and addressing fragility hold the greatest promise to address FOOD SECURITY challenges”

(Be a hero with PlantVillage...Read more

PlantVillage Nuru is saddened by the sudden demise of late Mr. Dunclapperton Omeru on 10th January 2020 and would like to express our deep condolences to the family of the deceased, who will be laid to rest on 24th January 2020.

Mr. Omeru worked with PlantVillage as a seed entrepreneur since last year in Busia County Kenya. He came across as a very active and spirited person who took part in reaching out to other farmers to educate them on...Read more

Buckle up! The bar has been raised.

Another year full of expectations and like everybody, Dream Team expects growth. With New Year come new expectations, new resolutions, new strategies, new goals and plans. Dream team members have also set their New Year expectations and we couldn’t wait to share with everyone to help us grow. The team is as ready as ever to take up their new roles and responsibilities in ensuring that...Read more

Posted on January 2, 2020 by PlantVillage

Happy New Year PlantVillage community! While 2019 is over and 2020 has begun, whether we were ready or not, there is plenty to reminisce about over the past year. Below is a brief highlight of the major events that occurred at PlantVillage during 2019.

What started as a concept idea in June by Dr. John Chelal, plant pathologist lecturer at Moi University and PlantVillage’s project director, led to a full team deployment in...Read more

So we head to the two mouths. The place is well endowed with beautiful rock structures and some tough...Read more

The Teso people are plain Nilotes who came from Sudan and came to Kenya through Uganda where they separated with the Karamojong community who remained in Uganda. They are an ethnic group in Eastern Uganda and Western Kenya. The Kenyan group entered Kenya through Malaba. Malaba is a Teso name meaning “crossing”. They settled in some regions of around Busia county and named the place...Read more

Busia county has been our home base for the past four months. Butula, Budalangi, Matayos, and Samia are the sub-counties that we visit. These-sub counties are more diverse with different tribes mainly; Luyha, Luo and Iteso. This makes it easier for us to communicate with people around Swahili being the common language shared. Our main aim is to reach out to the small scale farmers and disseminate information which has been possible with the help of...Read more

Cassava is indispensable to food security in Busia. It is a staple food that is widely consumed, as it is a hardy crop that can be stored in the ground for a long period of time. It is used as a fallback source of food that can save lives during famine. Despite cassava being a major crop in the county, it has received relatively little attention compared to other Staples such as maize. The crop has long been threatened by the cassava brown...Read more

In the South of Mt. Elgon, Teso plains offer sandy loam soils where most of the tuber crops do very well. The Iteso tribe is one of the plain Nilotic groups that adopted farming rather than pastoralism. Cassava is the main crop found in this area.  It is a source of food to almost every home and a cash crop for some of the farmers. They even have crisps and baking flour made from cassava. The Iteso people are so welcoming and most of them are eager...Read more

Posted on November 5, 2019 by PlantVillage

Hello, PlantVillage community! It has been quite the eventful and spectacular summer. We were fortunate to gain a new collaboration between us (PlantVillage at Penn State University), United Nations Food and Agricultural Organization (UN FAO) and Moi University located in Eldoret, Kenya. This new partnership with Moi University began as an effort to engage and integrate Kenyan youth into agricultural and farming...Read more

Josephine is a farmer in Western Kenya who had a serious problem. In fact, more than one. She is one of the 28,000 farmers within the Self Help Africa (SHA) network, spread across 7 counties in Kenya. Through a large EU funded project SHA is building climate resiliency into these communities and promoting profit-making at the farm gate by helping farmers grow more cassava. This crop is widely recognized...Read more

As you may know, we have been beta testing our AI assistant, Nuru, that is capable of diagnosing cassava viral and mite diseases in Busia County, Kenya.  We work with farmers in the Self Help Africa network. There are 28,000 farms in this network across 7 counties being helped by this excellent charity. The charity is trying to promote cassava which is a climate resilient crop. The farmers grow mainly maize, cassava, and...Read more

Overview of the PlantVillage app

We wanted to create an overview of the PlantVillage app. We have both an android and iphone version. It is only the android version which can use the TensorFlow AI tool to diagnose diseases.

Here is an annotated guide to the PlantVillage app https://play.google.com/store/apps/details?id=plantvillage.nuru&hl=en

This is the first page you see 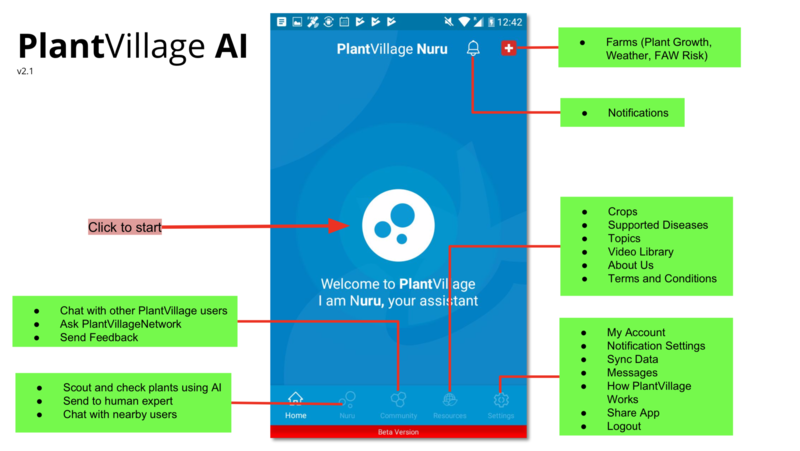 When you click on the flashing icon you see 4 choices 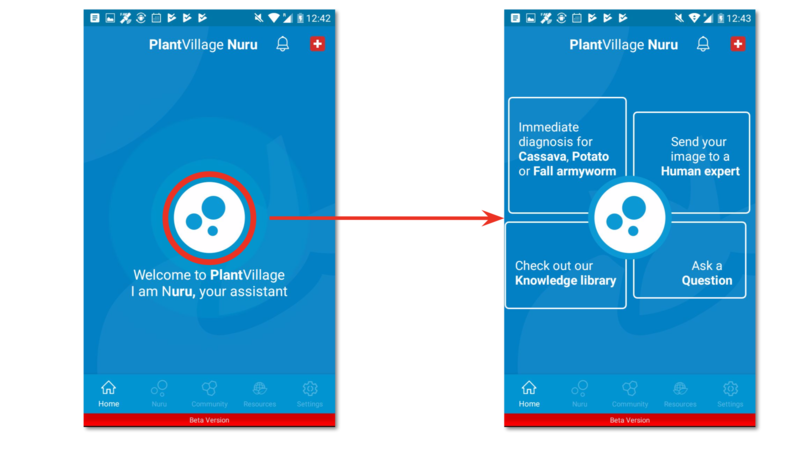 From black instars to red to adult flies, the Spotted Lanternflies are quickly approaching their adult phase and the PlantVillage team is on top of it! Working closely with Don Seifrit, extension educator and Karen George, Master Gardener, we are continually collecting data from sticky bands down in the Reading and Lancaster areas. This past Wednesday, Annalyse and Pete went down again to capture more images and talk with locals on this pest.

In past visits, Annalyse...Read more

It has been just two weeks since Nuru was released in her Beta or test phase. Our goal is to get her out there and understand how she performs. The strength of Nuru is that she works off-line and so can be used across regions where internet connectivity is poor or not present. But of course, we have to make sure that the diagnosis that she is providing is correct. So, in these two weeks, we have been testing Nuru with scientists who work in UN FAO field offices in Ethiopia, Zambia,...Read more