This is a community page, anyone can edit. Please sign in to edit.

Integrated Pest Management (IPM) is an ecosystem approach to crop production and protection that combines different management strategies and practices to grow healthy crops and minimize the use of pesticides.

Organizations like UN FAO promote IPM as the preferred approach to crop protection and regards it as a pillar of both sustainable intensification of crop production and pesticide risk reduction.  As such, IPM is being mainstreamed in FAO activities involving crop production and protection. Most groups focused on combatting FAW (FAO, USAID, CABI) are promoting an IPM approach.

Here we will go through some of the approaches of IPM. At the time on which this page was created (3/12/18) this work draws heavily from the FAO Publication Integrated management of the Fall Armyworm on maize But this page can be edited.  Here is a guide to using CK editing

Fall Armyworm has many naturally-occuring ‘natural enemies’ or ‘farmers’ friends’. These biological control agents are organisms that feed on FAW.

In the Americas, and probably in Africa, these natural enemies can be active during all development phases of FAW, i.e. in the egg, larval, pupal and adult stage. Natural enemies have the potential to substantially reduce the FAW populations and hence the damage caused by FAW.

Their impact however depends on a number of factors including the diversity of organisms being active, their life-style, local presence, numerical and timely abundance, host specificity, agronomic practices, pest management methods etc.

A major challenge is to create conditions to exploit the potential of these beneficial organisms to their full extent. Broad spectrum pesticides kill many of the farmers’ friends. It is important that farmers recognize the pest in all its development stages, its associated natural antagonists, identity possible gaps to be filled in local natural enemy guilds and at the same time sustain their action by adequate management measures in an IPM context.

Biological control should be understood as an integral component of IPM and an important part of mutually compatible pest-suppressing methods aimed at generating higher profits whilst preserving the environment and human health.

Biological control agents (BCAs) include the following: 1) predatory insects and mites, which eat their prey; 2) parasitoids, which are insects with a free living adult stage and a larval stage that is parasitic on another insect; and 3) parasites and microbial pathogens, such as nematodes, fungi, bacteria, viruses and protozoa, which cause lethal infections.

Parasitoids of the FAW

Parasitoids are organisms whose adults lay eggs inside or attached to a single host organism. For their development, the resultant larvae feed on the tissues of the host until they are fully grown and pupate. The larvae of parasitoids always kill their host as the outcome of their development.

The majority of parasitoids known to be associated with the FAW are wasps, and less frequently flies. Species that have undergone an adaptation process to the FAW display a narrow host range.

Such co-evolved parasitoids can exert a strong impact on populations of the fall armyworm and are thus good candidates for use in biological control programmes.

During inventories in the Western Hemisphere, about 150 different parasitoid species were found to be associated with the FAW in various crops.

The following are some of the most common parasitoids known to be well adapted to the FAW in the Americas:

In Africa, because of the relatively recent introduction of the FAW on the African continent, data on native natural enemies are still very scanty. First field data demonstrate that a few parasitoids species have already accepted eggs and caterpillars of the FAW as a host.

As these data are preliminary, it remains to be verified whether these natural enemies have shifted from African stemborers or earborers to the FAW, or if they represent new associations from other hosts.

The following parasitoids were recovered from the FAW in West, Central and East Africa:

Predators of the FAW

In this category, you find natural enemies that kill one or several individuals of FAW during their life time either as larvae or adults. In this case, eggs, caterpillars, pupae or adult FAW are considered as preys. Usually, predators are non-selective or generalists, thus they feed opportunistically on more than one host species, sometimes even on their own kind. The following insects belong to generalist predators:

Many carabid beetle species occurring in maize cropping are known for their predatory habits both as larvae or adults. Calosoma granulatum Perty has been observed to feed on young FAW caterpillars.

There are several species of bugs that have been observed to feed on immatures of the FAW. The best known of this category belong to the genera Zelus (Reduviidae), Podisus (Pentatomidae), Nabis (Nabidae), Geocoris (Lygaeidae), Orius and Anthocoris (Anthocoridae). 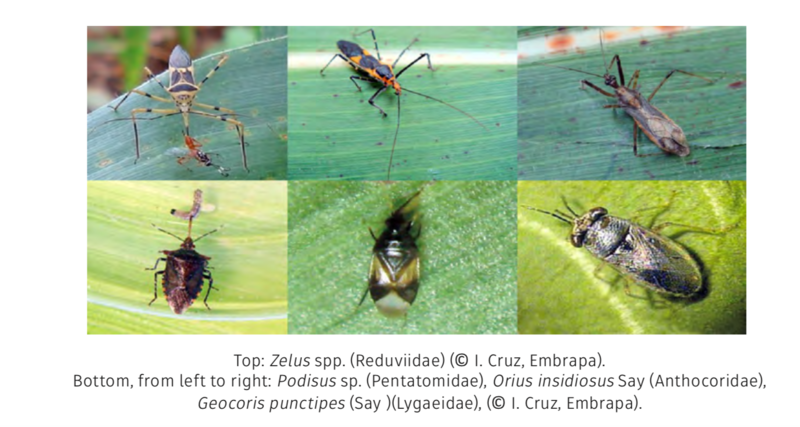 Ants are often among the most important predators of FAW larvae and pupae. Perfecto (1980) studied the interactions among ants, FAW and pesticides in maize systems in Nicaragua. She found that ants are very important predators of FAW in maize in Nicaragua and that pesticides dramatically reduced the presence and effectiveness of ants a natural biological control of FAW. She placed FAW pupae in the soil in maize fields and found that 92 percent of the pupae were removed within 4 days in fields without insecticide treatments, compared with only 4 percent in fields with insecticidal treatments.

Ants have already been seen attacking and killing FAW larvae in maize fields in Africa.

Some farmers have begun trying to apply lard or fish soup on their maize plants, to see if they can attract ants to their maize fields, so that they will then eat the FAW larvae present.

Spiders are predators and likley to attack FAW

Birds and bats have been observed to prey on FAW larvae. Studies in Central America have demonstrated significant impacts of birds on infestation levels of the FAW. Presence of trees or bird perches in or near fields will help attract birds who can prey on the FAW and help control their population.

Despite their importance as natural antagonists, a thorough assessment for predatory wasps, ants and spiders is often neglected because of the difficulty to establish a methodology to accurately assess their impact.

In Africa, though generalist predators such as ladybug beetles, earwigs, predatory bugs, eusocial- solitary- and other predatory wasps, ants and spiders are regularly observed in maize fields, a list of these natural enemies is yet not available.

It is expected that for these major functional groups, forthcoming assessments will reveal many parallels between the pest’s area of origin and the newly invaded continent.

Of these, the first three groups are the most common and will be mentioned here. In the Americas these pathogens are important as natural regulators of FAW populations. They have also already been observed killing FAW larvae in the field in Africa, so they are already present, at least in some farmers’ fields.

The host-specificity of these pathogens is quite high, usually restricted to a few closely-related insect species. These pathogens do not affect other groups of insects (natural enemies), plants, animals or humans.

FAW larvae naturally killed by viruses and fungi are easily identified in the field. Virus-killed larvae become soft and many hang from leaves, eventually oozing viroid particles and fluids (see photo ). Fungal- killed larvae turn rigid and appear “frozen” on the leaves, eventually turning white or light green, as the fungal spores mature. These are the two most common groups of entomopathogens naturally killing FAW larvae in the field.

Farmers can learn to recognize these ‘farmer-friendly’ pathogens in the field. They can also multiply them locally. Farmers in the Americas sometimes collect the dead and dying larvae, full of viroid particles of fungal spores (the infective stages of the pathogens), grind them up in kitchen blenders. Then they strain the larval body parts out, mix the concentrated filtrate of virus or fungus with water, and spray them back out into the field, especially directly into maize plants currently infested with FAW.

Entomopathogens can play a very important role in natural regulation of FAW populations in the field. Farmers should learn how to identify the different organisms, understand their biology and ecology, and begin to experiment with them! They are truly farmers’ friends!

Another very important aspect of prevention of FAW infestations is by maintaining plant diversity on farms.

Even if many female moths are flying about, if she doesn’t lay her egg masses on maize plants, or if very young larvae don’t move onto maize plants, then the maize won’t be infested by FAW.

FAW moths prefer maize to lay her eggs. In large monocultures of maize, she just flies about, laying her eggs in a sea of maize.

But when maize is intercropped with other crops or there are other plants nearby which she doesn’t like,

she is more likely to move on, skipping maize plants which may be mixed in with the plants she doesn’t like. That, obviously is the first step in good FAW management – reduce oviposition on maize plants! Farmers in Central America have noticed that when they plant maize together with other crops such as beans and squash (their traditional “milpa” systems), they have less pest attacks.

Agroecologists have documented that polycrops may be effective because of three main reasons or mechanisms:

We know that especially plants that bear flowers for a long pecriod of time, such as many “weeds” or some medicinal or plants used as condiments, do provide nectar to parasitoids and predators of FAW. In Mesoamerica, plants such as Tagetes lucida, Coriandrum, Sonchus olerace, Ruta and onions, attract beneficial insects.

Trees are also important for pest management. Trees allow birds to perch, and many birds prey over larvae, such as the FAW. In Africa, many farmers are growing maize in agroforestry systems (MIAF). It could be important to document if the MIAF plots have less FAW attacks than maize grow in a monocrop.

Push-pull is a habitat management strategy developed and implemented to manage pests such as stem borers, striga weed and address soil degradation, which are major constraints in maize production in Africa. The technology entails using a repellent intercrop (Desmodium as a “push”) and an attractive trap plant (Napier/Brachiaria grass as a “pull”).

The Napier grass planted around the maize farm:

At the same time, Desmodium, planted as an intercrop :

The Desmodium and Napier/Brachiaria grass grown in Push-pull farms also:

Push–pull is an effective and efficient low-cost technology as it addresses some major constraints faced by smallholder farmers. The multiple benefits of this technology can result in an overall and significant improvement of farmer’s food security and livelihoods.