This is a community page, anyone can edit. Please sign in to edit.

The problem of intercropping and weeds

CABI recently announced a system for forecasting the risk of pest outbreaks. This is a collaboration between CABI and the UK Space Agency (UKSA) that aims to use a network to prevent, rather than just mitigate infestations. They said it will "use a novel combination of earth observation technology, satellite positioning, and plant-pest lifecycle to deliver a science-based Pest Risk Information SErvice (PRISE) for sub-Saharan Africa. Expansive, novel crowd sourcing observations will also be established to strengthen and validate the system." https://www.bbc.com/news/science-environment-46370601

It is not clear from the media attention what the earth observations are. What satellites are being used. There is a document here about the project.  The project says it will use  "environmental data from Earth Observation validated by the consortium (e.g. land surface temperature and rainfall), pest phenology data across three different countries (Kenya, Zambia and Ghana) and crowdsourced observations."

There are a number of satellites that measure ground temperature and moisture. But since no details have been provided we cannot speculate.

It is worth stressing that there is no current evidence that PRISE can predict FAW.

Remote sensing is the acquisition of information about an object or phenomenon without making physical contact with the object and thus in contrast to on-site observation, especially the Earth. Remote sensing is used in numerous fields, including geography, land surveying and most Earth Science disciplines (for example, hydrology, ecology,  meteorology, oceanography, glaciology, geology); it also has military, intelligence, commercial, economic, planning, and humanitarian applications.

In this last case remote sensing has been suggested to be useful to track fall armyworm in Africa.

In current usage, the term "remote sensing" generally refers to the use of satellite- or aircraft-based sensor technologies to detect and classify objects on Earth. Aircraft can include drones.

The goal of this page is to enable practitioners in remote sensing of FAW to share success and failures. It is important that we do this collectively to avoid wasted efforts and to pool resources.

A few groups have explored the use of drones for FAW. The Hughes Lab at Penn State tested different heights over maize field from which human observers can detect FAW holes. They flew a Phantom D4 drone with a standard 4K camera. The determined that the drone had to be no more than 10m above the crop. Below are some example fields

One possible tool is a multi-spectral camera. We have flow the RedEdge camera a lot. This has 5 different bands and the data can be combined into different indices, for example, NDVI.

The problem of intercropping and weeds

Before proceeding to discuss how remote sensing could help in Africa to monitor and track FAW it is critical to appreciate the reality of what most smallholder farmer fields in Africa are: they are small (<2ha), with irregular boundaries and with extensive polyculture and weeds. That is not to say the continent does not have regular shaped fields that are monocrop and free of weeds- but the majority are not. This presents a major challenge to remote sensing- how can the camera on a satellite tell the difference between maize versus other crops/weeds. And if it does, how can it determine if the maize has FAW?

Here is a picture of a field in Western Kenya from Google maps. 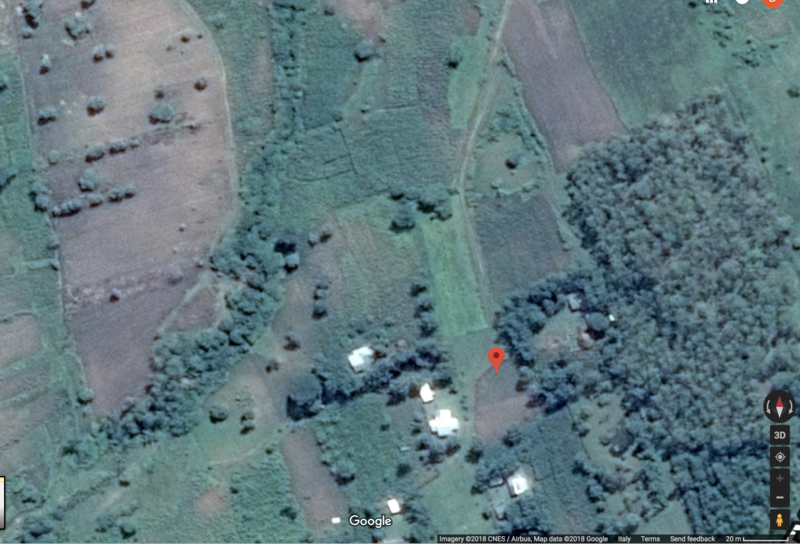 The point is the location that Dr John Chelal of Eldoret University used the PlantVillage Nuru app on December 4th 2018. Below is a picture he took from ground level 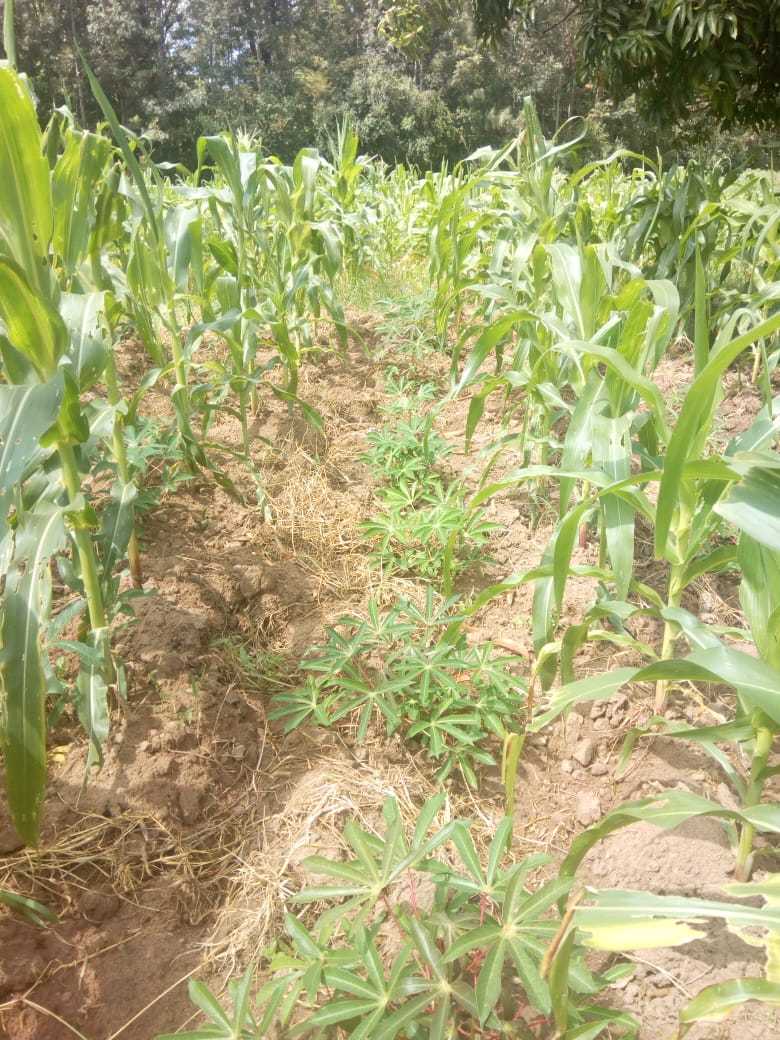 The challenge then is telling which crop is which.

Below is an image of 3m resolution Planet.com from Western Kenya. It is not the same field but it is a field with maize and cassava, and weeds. The colors are because the analysis is an index called NDVI (normalized difference vegetation index) that is commonly used. This is going to be hard to distinguish between crops. 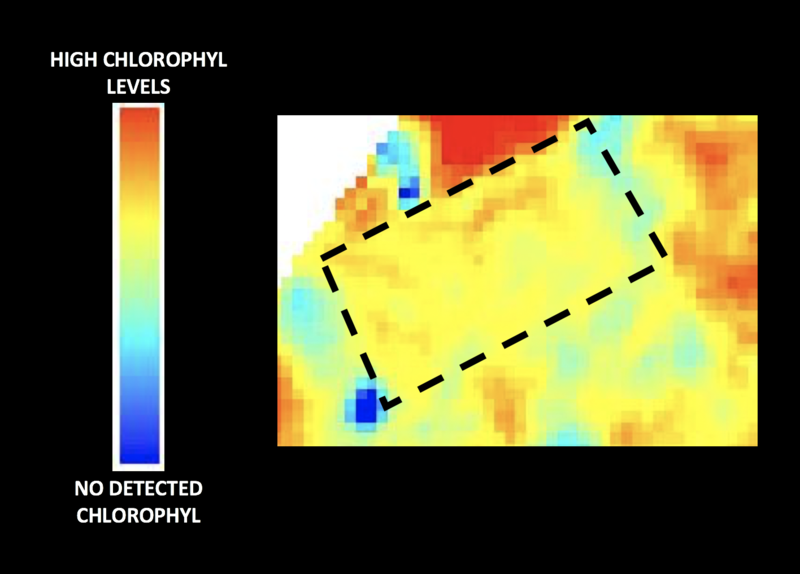 Below is the same field taken with a drone at 60m captured by the Hughes Lab. Even at this much closer distance distinguishing which crop is which is hard/ 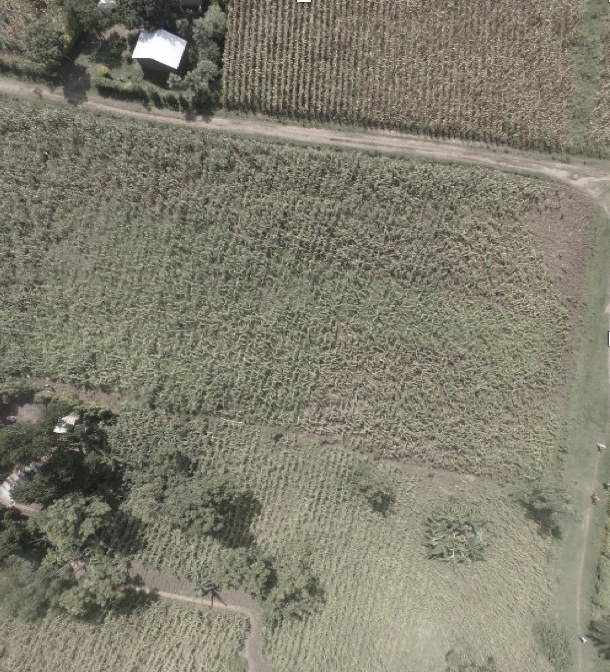 The issue of polyculture, weeds and irregular boundaries needs to be considered closely when advocating the use of remote sensing.

Researchers have successfully identified FAW damage in large homogenous maize fields in North America from satellite images, but the challenge is to build software that can analyse satellite images to spot FAW hotspots in small and highly heterogeneous smallholder fields in Africa. With funding from the UKs Lottery Fund, World Bank’s Trust Fund for Statistical Capacity Building (TFSCB), Irish Aid and the US Foundation for Food and Agriculture Research, ProvEye Ltd, an Irish company specialising in the application of AI to remote sensing, and Self Help Africa have been developing developing a machine learning algorithm that can detect the damage caused by the Fall Armyworm (Spodoptera frugiperda) to smallholder maize fields in Southern Africa in satellite images.

Government field staff collected data from 15m x 15m quadrates in geolocated sentinel pure maize fields in Malawi over three seasons, with 3-4 surveys per season. The field data was used to determine which parts of the light spectrum provided the strongest signal for FAW damage in order to develop and test the Random Forest-based algorithm. 15 maize plants were sampled in each quadrate and the damaged was scored on a 0-5 scale.  A large amount of data was collected from each site to capture all the factors that could affect reflectance (maize varity, growth stage, soil type, plant population, canopy height, canopy cover, other pests and diseases, water stress, nutrient deficiencies and nutrient applications) and FAW damage levels (crop rotations, previous FAW infestations, neighbouring crops). The project used 3.7m resolution, 4 band, satellite images, taken as close as possible to the time of each survey round sourced from Planet Labs.

Of the variables tested by far the most important variable for detecting FAW damage is the standard deviation of Near Infra Red reflectance, distantly followed by the Green Normalised Difference Vegetation Index. This was expected as discolouration of the green leaves of the maize plant, due to the reduction in chlorophyll, is one of the first indicators of FAW infestation and the NIR band is sensitive to changes in chlorophyll content, however it was surprising that other commonly used indices for plant health, like NDVI, did not rank higher.

One of the many challenges of using Machine Learning agorithms for this type of work is that machine learning algorithms learn best when they have a more or less even number of records for each damage level. For an insect pest like the Fall Armyworm the data will naturally be skewed. At the beginning of the season most of the plants sampled will have little or no FAW damage, by mid-season there will be a more even spread of damage levels, while by the end of season most of the plants will show high levels of damage. To overcome this problem the data had to be resampled to create even data sets. The project adopted the FAW damage scale used by maize breeders which was, with hindsight, inappropriate for remote sensing (no satellite can detect FAW eggs!), so the damage scale data had to be merged into (a) presence and absence and (b) a simplified damage scale (1-4).

Machine Learning algorithms learn from their mistakes and after over 1,000 cycles the ProvEye algorithm can now detect the presence or absence of FAW damage with up to 87% accuracy.  Using the simplified damage scale the level of damage can be predicted with 63-69% accuracy based on remote sensing data only, however accuracy of 75% can be achieved when field data is included. The critical field variable is crop growth stage. At the v2-v3 stage there is considerable reflectance directly from the soil, and from the soil through the leaf, which creates "noise". If the algorithm knows the crop growth stage it can compensate for this noise.

The success of the this "proof of concept" research lays the foundations for developing remote sensing software that can identify FAW damage hot spots at the landscape level, enabling governments to target scarce control resources on these hotspots and estimate crop losses. The success also indicates that this approach can be used to detect other crop pests and diseases that change the colour of the crop canopy, like banana bunchy top virus.  It is important to note that the first stage of this research used maize fields identified by the survey teams. To be usable by government agronomists the software needs to be able to detect maize fields in satellite images so the next stage of the research is to use a “Crop Mask”, a piece of software that can detect the crop automatically. As the following paragraphs describe, this is not a simple process, but companies like OneSoil and research institutions have made considerable progress in developing crop masks. It is also important to note that this approach only detects crop damage caused by the FAW and cannot, unlike the CABI approach, make any predictions about where FAW outbreaks may occur.